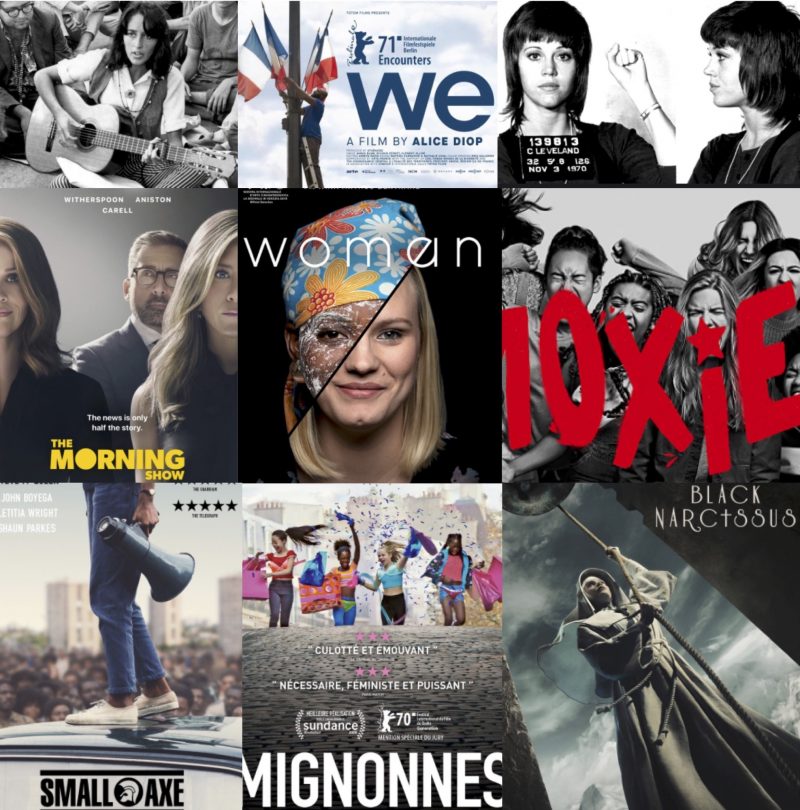 This week, all the news is about women, from their birth to their adult age:

International Women’s Rights Day, the confrontation between Meghan Markle and Queen Elizabeth II of England, via an interview with Oprah Winfrey, a documentary on Billie Eilish, young female music prodigy, the broadcast of Wonder Woman on TF1 next Sunday, Woman, the magnificent documentary directed by Anastasia Mikova and Yann Arthus-Bertrand on France 5, Mignonnes de Maïmouna Doucouré, selected for the César to be broadcast on Friday on Canal +…

The international documentary film festival proposes a specific and federative form on CANALRÉEL. A new dematerialized festival experience, with live and simultaneous films, debates and meetings every day. 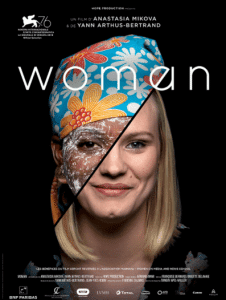 Anastasia Mikova and Yann Arthus-Bertrand collected 2000 testimonies and travelled to 50 countries to make this documentary, a true historical document of the situation of women in our century.

A time when women still suffer intolerable domestic, family, racial and social violence. More than one woman in three suffers violence during her lifetime. Less than 10% of countries are headed by women and 70% live below the poverty line.

Beyond these figures, it is the human aspect that stands out in this documentary when women speak, moments of pure emotion and total truth, which is the essence of the documentary.

All subjects are covered, whether it is violence, love, sex, marriage or career.

The great photographer Peter Lindbergh collaborated on the documentary and shows us in intimate scenes the relationship of women with their own bodies. Sublime scenes with the dancers of the Bandaloop collective full of poetry magnify this extraordinary documentary to be seen during one week in replay on France 5.TV.

TO BE SEEN ON FRANCE 5 (REPLAY)

Alex Levy (Jennifer Aniston) and Mitch Kessler (Steve Carell) have been presenting the Morning Show together for ten years.

One morning, when his alarm clock rings at 3:30 a.m. every night, Alex learns that his work partner has been fired for sexual harassment. It is imperative that the network find a replacement.

In contrast, a high-worded reporter, Bradley Jackson (Reese Witherspoon), gets angry at a pro-carbon protester. Her anger is filmed without her realizing it, and she makes a million views on Twitter.

The new director of the channel, Cory Ellison (Billy Crudup), then decides to bring Bradley Jackson to New York…

With a pitch like that, I was expecting something quite classical, like Bombshell and a bit boring. It’s nothing of the sort.

The ten episodes are thrilling and take us to our guts because it’s about the destiny of women, those who have chosen to make a career in the ruthless environment that is television.

Jennifer Aniston, whom we saw in Friends finally finds a role that suits her. She’s the perfect woman who has sacrificed everything for her career and is looking to keep her job at all costs while the network’s bosses are trying to get her out of it.

Reese Witherspoon is never as good as when she’s angry. Her classic female role in Little Fires Everywhere didn’t suit her.

Apart from the sexual harassment and silence and the innuendoes that hover when it happens and whose hypocrisy (everyone knew) is so well shown, the series shows that female solidarity rarely exists.

These acts of harassment have a lifelong impact.

The Morning Show also offers us two visions of journalism, one of entertainment with a form that is more important than the content, so as not to make the viewer think, and the second one oriented towards content, and two very different visions of what a news program is.

The actress told the Los Angeles Times in an interview in August (source: Elle): “That show was 20 years of therapy in 10 episodes…”. Indeed, because of her celebrity in the series, the presenter must always be on her guard and be perfect in all circumstances, because she is constantly monitored.

TO WATCH  ON APPLE TV AT THE MOMENT – TEN EPISODES 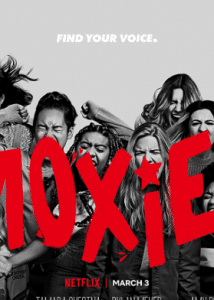 Lucy, a new Métis student of Latin origin, arrives in Vivian’s class. But a boy, Mitchell, takes a grudge against her and harasses her.

Vivian advises her to ignore him and keep a low profile. She says, “He’s dangerous…I will keep my head up and high. Lucy complains to the principal, who prefers to trivialize the fact that the student in question is the Captain of the soccer team.

Every year, the boys of the school make a ranking of the girls and make it public. Vivian understands that this is going too far.

When she gets home, she rummages through her mother’s boxes of souvenirs from her mother, an early feminist, and finds records of drawings and signs of events. Vivian then decides to create a feminist zine (fanzine, small magazine) where she blames the boys in high school for what they do. And the zine  is called Moxie (revolution, courage).

The next day, she makes it available anonymously in the toilets. Little by little, the girls in the school take it over and start to get angry. But Claudia, Vivian’s best friend, does not follow the movement, to her great disappointment…

Moxie is different from other teen movies in many ways. While it is feminist, it is also about inclusion, whether it is gendered (a trans actress is in the cast: Josie Toah) or about the origins of high school girls.  Claudia doesn’t immediately follow her best friend’s rebellion because her mother, of Chinese origin, fought to integrate into the country.

This film also talks about the silence and the difficulty of denouncing the acts that bother us, from the most trivial to the most serious.

The director, creator and mother of Vivian in the film is Amy Poehler, a feminist and committed actress, former regular of Saturday Night Live and actress of the sitcom Parks & Recreation.

We will have to follow closely the actresses Hadley Robinson (Vivian), Lauren Tsai (Claudia), Alycia Pascual-Pena (Lucy) as well as Patrick Scharzenegger (Mitchell in the film and son of Arnold and Maria Shriver) for whom these are the lead roles.

The soundtrack is terrible. I suggest, to put you in a good feminist mood, to listen to Kill’s Rebellion by Bikini, Tierra Whack and Princess Nokia.

To be seen at the moment on NETFLIX. 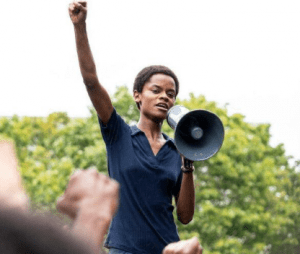 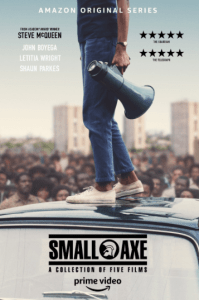 Five episodes, all different, tell the story of this community that suffered in the 60s and 70s racism and revolted against systemic police violence.

At the heart of this rebellion were women, who were fighting both the racism of the English and the sexism of their own community.

Small Axe. This title was given by the director in homage to Bob Marley’s song, and to a Jamaican proverb: “If you are the big tree, we are the small axe”.

The episode centers on the story of the restaurant “La Mangrove” and the “Mangrove Nine”, the landmark trial of nine black British activists on trial for inciting riots after the August 9, 1970 protest against the Notting Hill police’s systemic racist targeting of La Mangrove restaurant.

The second focuses on two young women going out at night. Steve McQueen has his own way of filming the bodies and creates in a few seconds an atmosphere of fear or well-being.

This is the case in this episode where the two young women are at a party, dancing and at certain moments all the participants sing and groove .  And at this moment, it makes you dream.

He dedicated this series to George Floyd, whose trial related to his assassination is taking place right now in the United States, and this series concerns all of us.

The Mauritanian, by Kevin Macdonald (director of Life in a Day on Youtube), with Jodie Foster & Tahar Rahim ( Golden Globes nomination this year). 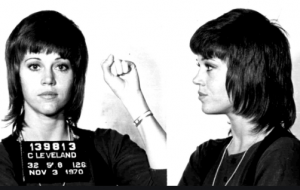 A masterclass with Jane Fonda 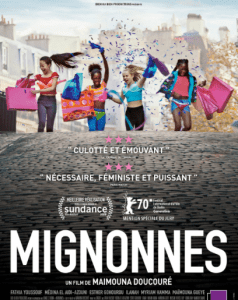 Canal + : Été 85, by François Ozon, selected for the Cesar 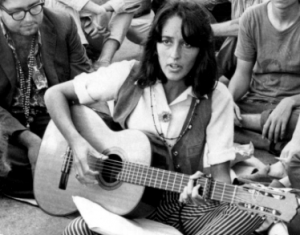 A woman who was film historian and film critic, and who founded the Cinémathèque française with Henri Langlois in 1936.

After the disappearance of a young woman of Kurdish origin, Chief Inspector Caroline Goode leads the investigation. This breathtaking fiction recounts a tragic news story that shook Great Britain in 2006.

The Beguiled by Sofia Coppola

AFTER THE WEDDING, by Susanne Bier with Mads Mikkelsen

The Crown, created by Peter Morgan

Paper Lives, by Can Ulkay, as from March 12th

On the basis of sex, by Mimi Leder, on Ruth Bader Ginsburg

Without remorse, by Stefano Sollima, with Michael B. Jordan (April 30)

The Perfect candidate, by Haifaa Al Mansour with Mila Alzahrani.

Six fois confiné.e.s, by Alice Moitié: as from March 15th.

Six twenty-minute episodes take place in places with very distinct atmospheres: a Parisian apartment, an architect’s house, a suburban pavilion. With Vincent Cassel as a 50-year-old DJ, Félix Moati and Gilbert Melki as the haves and have-nots, Ludivine Sagnier in the role of a Parisian woman back in her childhood home.

Your movies and series about women

The Attaché, as from March 14, series created by Eli Ben David:

Avshalom (Eli Ben David, also the creator of the series) is a well-known Tel Aviv musician who follows his wife (Héloïse Godet) in her new position as attaché at the Israeli Embassy in Paris, the city where she grew up.

Losing Alice, by Sigal Ivan, with Ayelet Zurer (listen to the French podcast Falafel Cinema): the story of two women who would do anything to create a movie.

WandaVision, by Jan Schaeffer with Elisabeth Olsen & Paul Bettany: the story of a nostalgic super heroin.

Raya & the last dragon  (already out in the US)

A new adaptation of the novel Black Narcissus by the Englishwoman Rumer Godden, published in 1939. An Anglican nun sent to a remote corner of the Himalayas during the inter-war period to establish a dispensary in a former harem.

In the role of Mother Superior, Diana Rigg plays one of her last part. Gemma Arterton plays the part of Deborah Kerr, Sister Clodagh, in the first adaptation.