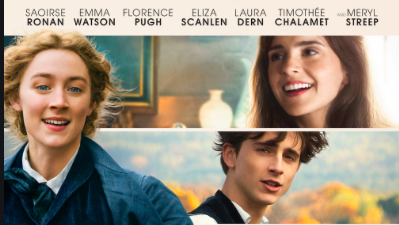 “My little women!” exclaims Dr. March, when, return from the army, he meets again his daughters…These words gave birth to the title Little Women,novel inspired by the life of her author, Louisa May Alcott and adapted for the cinema for the sixth time.

THEY WERE GREAT WOMEN

Little Women.
This adaptation of the eponymous novel and its sequel Doctor March Marries his Daughters, directed by Greta Gerwig, is both beautiful and modern.

The director has surrounded herself with a great actors to tell the story of Margaret “Meg”, Josephine “Jo”, Elizabeth “Beth”, Amy and Mary.

Their mother takes care of her daughters alone, while her husband, a chaplain,volunteered with the Northerners during the American Civil War (1861-1865).

At that time, women had no access to property, except if they were heiress as Aunt Josephine. Everything belonged to the husband, as soon as they got married.

Marriage was their only way out because everything belonged to the man. Greta Gerwig insisted on this fact and has made a committed, feminist film.

The ending is bound to challenge you.

To be a woman yesterday vs today

Still now, men are born with a total freedom – at least, in the Western world. They have no social pressure to marry or have children. Even divorced, they pursue their social life, blackmailing for alimony to do what they want. They let the education to women, preoccupied by their career, that is, their well being, that is their ego.

Being a woman requires courage, determination and a strong will to make a living and manage both professional and private life.

Men already have their place in the world and have only to work hard to make a place for themselves. Women will have to fight against educational stereotypes and men’s violence, whether physical or mental, in the private sphere or at work, since they have both the best professional situations and the best salaries for equal skills.

Has it changed that much?

Françoise Héritier isprofessor at the Collège de France. She had shown that the distinction between feminine and masculine is universal and “everywhere, at all times and in all places, the masculine is considered superior to the feminine.

She calls this the “differential valence of the sexes”.

Based on the work of Claude Lévi-Strauss, she observes that a fundamental presupposition was missing from her alliance theory. Why did men feel they had the right to use women as a bargaining chip?

She wrote as follows

“This form of contract between men, as ethnological experience shows us, is at work everywhere. In all latitudes, in groups that are very different from one another, we see men exchanging women, and not the other way around.
We never see women exchanging men, nor do we see mixed groups of men and women exchanging men and women. No, only men have this right, and they have it everywhere.
This is what makes me say that the differential valence of the sexes already existed as early as the Paleolithic, as early as the beginnings of humanity.”

The emancipation of women at the very beginning of Louisa May Alcott’s novel is still not over.

It will take another century, according to the 14th annual survey of the World Economic Forum, to erase the inequalities between men and women in the world.

Here in France, the law still does not protect women effectively.

According to the gender and sexual violence collective NousToutes (@noustoutesorg), there have already been four feminicides recorded since 1 January 2020, whom one of them was eighty-four years old.