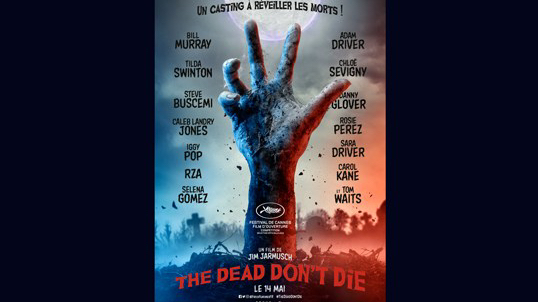 In The dead don’t die…
The slope of the Earth rotation axis on its orbit has changed, night and days are displayed, moon is omnipresent. Suddenly, dead rise up from the earth. (the scenes remind us of « Thriller », the great first videoclip of Michael Jackson, directed , by John Landis) and devour slowly the people of the city of Centerville.

In The dead don’t die,

We all are zombies

Though I didn’t see it in Cannes, I attended the first evening at the UGC Normandy on the Champs-Elysées.

The pitch: The policemen, Cliff (Bill Murray), Ronald (Adam Driver) and Minerva (Chloé Sevigny) are fighting zombies.
« This is gonna end badly »… repeats Adam Driver over and over. The actor is tremendous (brillant in BlackKklansman » last year) and we finally meet again with the great Bill Murray.

But despite a great casting, perfect actors (Steve Buscemi and Danny Glover), the first part is hilarious but gets a little boring during in its second part.

Besides, the message is badly too explicit.

Jim Jarmusch tackles climate change and how consumer society leads us to an inevitable end.

We are all zombies except the children and the animals and those kept away from material goods. And we cannot die because we are already dead…

As in its former movies, he added many references and tributes : Hitchcock, « Moby Dick » by Herman Melville, Tarantino, Spielberg, Star Wars, Lords of the ring…

Only lovers left alive with Tilda Swinton talked already of men as zombies and spoke about the end of humanity. In the movie, her name is an anagram.

The dead don’t die is also against President Donald Trump. Besides the negation of the climate change,  the hate, Ronald declares « I love Mexico and I’ve been friends with many Mexicans“.

That’s one of the reason why the movie has also been selected for the Festival.