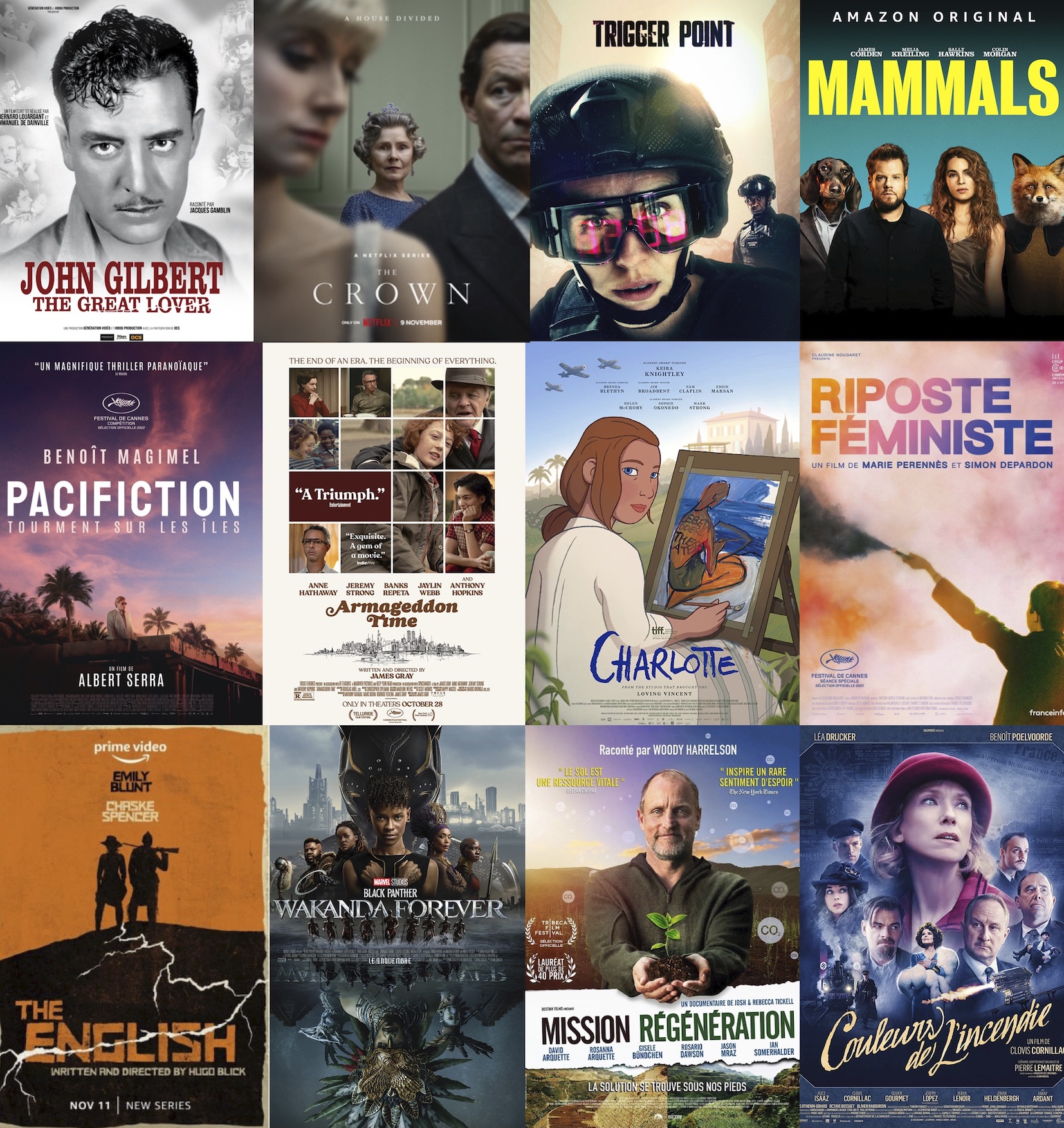 What films to watch as from November 9th

Films as from November 9th

Your news as from November 9th 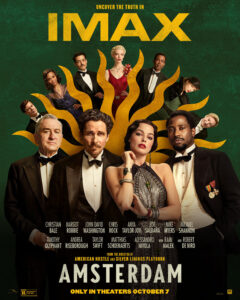 In the 1930s, three friends witness a murder, become suspects themselves and uncover one of the most outrageous conspiracies in American history.

Based on a true story

World War I. France. Burt Berendsen (Christian Bale), a doctor by trade, is sent to the front lines by his middle-class Park Avenue family to prove himself. He meets Private Harold Woodman (John David Washington) who rejects his racist superiors. Just like in Casablanca, this is the beginning of a beautiful friendship, which is joined by nurse Valerie (Margot Robbie) who saves their lives. And all three decide to leave for Amsterdam.

The 1930s. In New York, Burt Berendsen, who lost an eye in the war, has opened a clinic for broken heads and is rejected by his family.

One day, his best friend, Harold, comes to ask him a favor. To perform an autopsy on the father of a friend, Bill Meekings, whose daughter, Liz, suspects that he was murdered.

As Liz is murdered before their eyes, the two men present at the scene of the crime find themselves pursued by the police unless they can prove their innocence.

Conceived as a who donut it (who committed the crime?), the director plunges us into the era of rising extremism and tells us the story of a conspiracy denounced by General Gil Dillenbeck (Robert de Niro in the film), veteran and hero of the First World War, to overthrow President Franklin D. Roosvelt.

The director was in the midst of filming while thousands of radical protesters gather for a demonstration at the invitation of incumbent President Donald Trump, who incites hundreds of rioters to storm the building in an attempt to block the certification of the results of the electoral college vote in the 2020 U.S. presidential election and the victory of President-elect Joe Biden.

While extremism is on the rise, David O. Russel succeeds with humor and empathy, a film that pays tribute to the combatants, those of the first world war but also to the defenders of this fragile democracy. 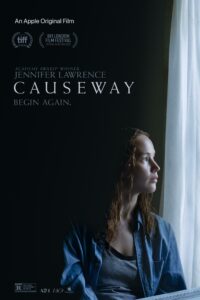 During a mission in Afghanistan, Lynsey, an army engineer, is injured by an explosive device. Suffering from brain damage, she returns to the United States. She begins a painful and slow recovery during which she relearns to walk and to use her memory, with the support of a caregiver. When she returns to her home in New Orleans, she is faced with painful memories.

The AppleTv platform never ceases to seduce us.

How to rebuild yourself?

This is the theme that director Lila Neugebauer tackles with finesse in Causeway. The script is brilliant, written by Luke Goebel, Ottessa Moshfegh (her novel Eileen won the 2005 Booker Prize).

Lindsay (Jennifer Lawrence) and James (Brian Tyree Henry) form a duo that we can not resist.

The power of cinema is to allow the creation of intimacy between two characters in a matter of seconds. Lindsay and James are both bruised and speak little.

Lindsay wants to rebuild her life and go back to Afghanistan, James lives with his guilt and refuses to leave the city.

Causeway is built around silences and bodies. And in the words, there is hope for healing. 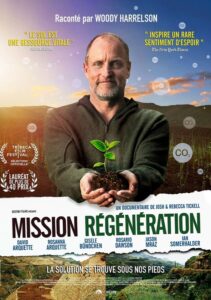 The planet’s soils are the key to reversing global warming. By regenerating them, we can completely stabilize the Earth’s climate, restore lost ecosystems and create abundant food supplies. How can the food you eat turn the tide, heal your body and ultimately save our world?

Narrated in voice-over by actor Woody Harrelson, “Kiss the ground” addresses the problem that affects us all: global warming.

It does not take the opposite view but proposes solutions and shows that reversing the global warming curve is possible through soil regeneration. Soils are able to retain the carbon emitted into the atmosphere.

During the seven years of filming, the filmmakers met with hundreds of scientists who are going to educate people in the United States about a different kind of agriculture. For the moment only 5% of the farms are managed in a way that regenerates the soil.

Thus the example of an edible forest in San Diego where it is possible to cultivate everything by simply planting a few trees, or to reduce the pollution produced by livestock by making cows graze on grass instead of feeding them crops that deplete the soil.

Today it is proven that the most profitable agriculture is the healthy agriculture.

The directors give the example of China where 32,000 m2 of soil have been regenerated.

A worldwide awareness is necessary but above all and as always political action.

This documentary gives hope and brings solutions. The concrete examples are astonishing and the directors have succeeded in their bet, convincing us that there is no fatality.

FILMS TO WATCH IN YOUR MOVIE THEATERS AS FROM NOVEMBER 9th

Queen Ramonda, Shuri, M’Baku, Okoye and the Dora Milaje struggle to protect their nation from interference by other world powers after the death of King T’Challa. As the people struggle to move forward, our heroes will have to unite and rely on the help of mercenary Nakia and Everett Ross.

A very personal coming-of-age story about a Queens boy in the 1980s, the strength of family and the generational quest for the American dream.

Charlotte Salomon is a young German-Jewish painter whose fate changes on the eve of the Second World War. Faced with the whirlwind of history and the revelation of a family secret, only an extraordinary act can save her. She then begins the work of her life.

Baptiste, 29, is in a relationship with Samia, when he meets Cookie Kunty, a young drag queen of the Parisian nightlife. Driven by the idea of a photo project with her, he immerses himself in a world of which he discovers everything, until he begins a relationship with Quentin, the young man behind the drag queen.

February 1927. After the death of Marcel Péricourt, his daughter, Madeleine, must take over the financial empire of which she is the heiress. But she has a son, Paul, who, in an unexpected and tragic move, sets her on the road to ruin and downfall.

Élise in Brest, Alexia in Saint-Etienne, Cécile in Compiègne and Jill in Marseille: thousands of young women are denouncing the sexist violence, street harassment and macho remarks they suffer on a daily basis.

On the island of Tahiti, the High Commissioner of the Republic De Roller, representative of the French State, is a man of calculation with perfect manners. In official receptions as well as in illegal establishments, he takes the pulse of a local population from which anger can emerge at any moment.

Samantha Davies, 47 years old, a great sailor, sets out on a race around the world. She almost dies in a serious accident and questions her life as an adventurer. Supported by her team and her family, will she have the strength to set off again despite everything?

Celebrate Your Victories. Based on my experiences as a…  by Scott Myers

TV PROGRAM AS FROM NOVEMBER 9th

5. BEST DOCUMENTARIES, FILMS & SERIES AS FROM NOVEMBER 9th ON ARTE

Series as from November 2nd

Having just finished her novel, Nathalie feels a mysterious presence in the house.

Gradually, she is haunted by the impression that when her daughter was adopted, something followed her home. The mini-series “Spirit of Winter” is adapted from the novel by Laura Kasischke and stars Audrey Fleurot.

Best series & films as from November 9th on Netflix

The Crown, season 5, on November 9th

And The Wonder, on November 16th, by Sebastián Lelio, with Florence Pugh

The Swimmers, by Sally El-Hosaini. on November 23

Best series & films as from November 9th on Prime Video

The English, by Hugo Blick, with Emily Blunt, on November 11th.

Best series & films as from November 9th on Canal+

Best series & films as from November 9th on Apple TV

Spirited, on November 18th, directed by  Sean Anders & written by Anders & John Morris. This is a modern adaptation of A Christmas Carol by Charles Dickens written in 1843.

The movie honors Armstrong’s legacy as a founding father of jazz, one of the first internationally known and beloved stars, and a cultural ambassador of the United States.

It shows how Armstrong’s own life spans the shift from the Civil War to the Civil Rights movement, and how he became a lightning rod figure in that turbulent era.

Best series & films as from November 9th on Disney Plus

Best series & films as from November 9th on Lionsgate