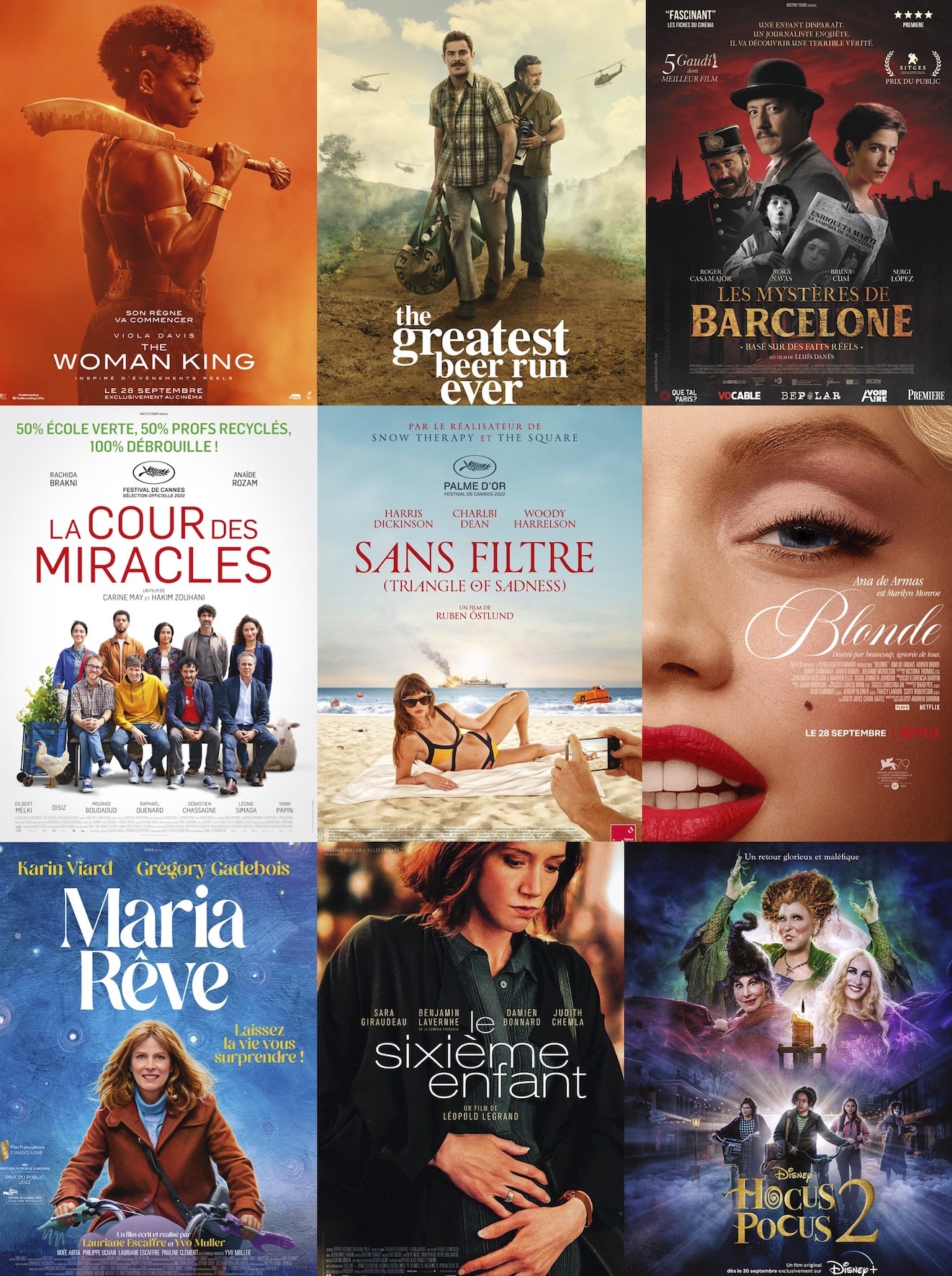 What films to watch as from September 28th

Your news as from September 28th

Alice and Jack Chambers are a happy young couple in the 1950s, living in a seemingly perfect isolated community in the California desert, Victory, which was created and funded by the mysterious company Jack works for. The 1950s societal optimism advocated by their CEO, Frank – both visionary and motivational life coach – permeates every aspect of daily life in this utopia in the middle of the desert. While the husbands spend all their days at Victory Project headquarters, working on “progressive materials development,” their wives – including Frank’s elegant partner, Shelley – spend their time enjoying the beauty, luxury and debauchery of their small, private community.

Life seems perfect, with each resident’s needs met by the business. All they ask in return is discretion and an unwavering commitment to the Victory cause. But when cracks begin to appear in her idyllic life, gradually exposing something far more sinister lurking beneath the attractive facade, Alice can’t help but wonder what is going on at Victory, and to what end. How far is Alice willing to go to understand what is really going on in this paradise?

Like Truman in the movie Truman Show, everything in Alice’s life seems perfect.

Every day, Alice cooks, cleans, chats with her neighbors like  Desperate Housewives and looks good for her loving husband. On weekends, she spends it with her friends at the pool and in the evening at cocktail parties with her neighbors. But one day, something goes wrong. She hears a familiar piece of music but doesn’t know what it is.

Shortly after, Alice also has nightmares…
What is going on in this town run by Frank (Chris Pine), guru and instigator of the project? Why are the inhabitants not allowed to leave the town of Victory?

The mystery behind this perfect town keeps us in suspense until the end. Director Olivia Wilde (who also stars in the film) immerses us in an atmosphere that is both glamorous and terrifying. This situation of housewives trapped in their golden cage has existed and still exists. Men exercise their power whenever they can and unlike women – but this is changing, and the film also shows this – are much more supportive of each other when it comes to maintaining control.

Scripted by Katie Silberman, Carey and Shane Van Dyke, “Don’t Worry Darling” reminded me of “Promising Young Woman.” The societal violence is there, again, present, through power and possession.

Florence Pugh, in the role of Alice, reveals here all her talent. She far exceeds her partner in the film, Jack, played by Harry Styles. Also noteworthy is the beautiful and polished Mad Men-style photography by Matthew J. Libatique and the music by John Powell.
It is a pity that Olivia Wilde did not apply her principles to the film. Harry Styles, her companion, would have received 1.5 million dollars while Florence Pugh, 700 thousand dollars, hence the understandable tensions during the promotion of the film.

Now in the best theaters of your town. 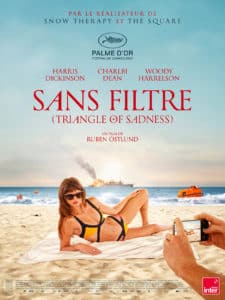 After Fashion Week, Carl and Yaya, a couple of models and influencers, are invited on a yacht for a luxury cruise. While the crew takes care of the guests, the captain refuses to leave his cabin as the famous gala dinner approaches. Events take an unexpected turn and the balance of power is reversed when a storm hits and endangers the comfort of the passengers.

After the screening of Triangle of Sadness, director Ruben Östlund dedicated the film to the young actress and model Charlbi Dean, who died suddenly at the age of 32 of a fulgurating lung infection.

She played Yaya, supermodel and influencer, in couple with Carl, played by Harry Dickinson.

We watch this couple, inspired by the experiences of the director, who evolves in the midst of ultra-rich people who are convinced that they have full power.

Rüben Östlund shows us that beauty and sexuality can be currencies of exchange, through the example of fashion advertisements but also in the daily life of a couple.  So, who should pay the bill? The man? The woman? Why? Does it have to be systematic if we want to get out of the principles of maintained women and evolve towards another society? Is a matriarchy possible?

Triangle of Sadness plunges us into the world of the very, very rich, the world of fashion, arms dealers and successful investors. Hierarchical relationships are based on money. When this invisible protection disappears, what happens? Who is at the top of the pyramid?

Rüben Östlund subtly describes these relationships. The rich are not all unsympathetic, and the poorest are not necessarily sympathetic. The only thing at stake is life. And to survive, must one use violence or submit?

He won the Palme d’Or for the third time at the Cannes Film Festival this year, a well-deserved prize for a film which perfectly matches with our times.

FILMS TO WATCH IN YOUR MOVIE THEATERS AS FROM SEPTEMBER 28th

Inspired by true events, The Woman King follows the epic story of General Nanisca as she trains a new generation of recruits and prepares them for battle against an enemy determined to destroy their way of life. There are some causes worth fighting for…

For the first time, Marie spends her vacations alone with her children, without her husband. One evening, lost, she is seduced by a strange and fascinating young man who slowly draws her into his trap. A nightmare begins…

Maria is a cleaning lady. She has been married for 25 years, is shy and awkward, and never leaves her flowered notebook in which she writes poems in secret. When she is assigned to the École des Beaux-Arts, she meets Hubert, the school’s whimsical janitor, and discovers a fascinating place where freedom reigns.

an elementary school in Seine-Saint-Denis, is threatened by the arrival of a brand new, trendy, eco-friendly school. Zahia, the school principal, in search of social diversity, joins forces with Marion, a young teacher full of ideas, to create the first “green school” in the suburbs.

Franck, a scrap metal dealer, and Meriem have five children, a sixth on the way, and serious money problems. Julien and Anna are lawyers and can’t have children. This is the story of an unthinkable arrangement.

Reader Question: How do I handle characters speaking in a foreign language?  by Scott Myers

TV PROGRAM AS FROM SEPTEMBER 28th 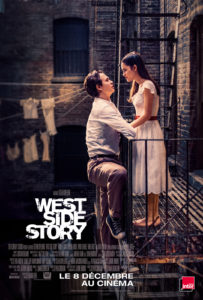 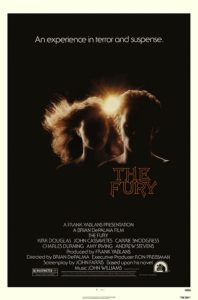 Canal Plus : The North Sea

Canal Plus : West Side Story

5. BEST DOCUMENTARIES, FILMS & SERIES AS FROM SEPTEMBER 28th ON ARTE

Documentary as from September 28th

Between media explosion and emancipatory conquest, a journey to the heart of the Spice Girls whirlwind, which wrung out its performers but contributed to changing mentalities.

The myth of the perfect mother, Marion Priglinger

The ideal mother figure, like that of the woman, has undergone many variations over the centuries, but it has never ceased to exist.

How was this myth formed that still pursues today’s mothers?

Spread over several latitudes, the African continent presents a wide variety of climates, and over the millennia, humans have deployed a wealth of ingenuity in their adaptation strategies to survive the extreme conditions of these territories.

Les années Super 8, Annie Ernaux talks on snippets of silent images edited by her son David, from family films of the 1970s. The chronicle of an era as well as a powerful story of female emancipation.

Series as From September 28th

Adrien, a writer in need of inspiration, is hired by a mysterious retiree to write his memoirs. ⁠ The man tells him about his past as a serial killer and his passionate love story with Solange. ⁠ A relationship of fascination and rejection develops between Adrien and the former serial killer. ⁠ ⁠

The writer Gabriel Katz has accepted the challenge offered to him by the directors of the new Arte series “Les Papillons noirs”: to invent and write at full speed the detective story written by a major character in the scenario.

The book has just been released in bookstores and thus creates an unprecedented bridge between fiction and reality.⁠ ⁠

Films as from September 28th

Best series & films as from September 28th on Netflix

Best series & films as from September 28th on Prime Video

The Peripheral, on October 21st, by Jonathan Nolan, Lisa Joy.

Best series & films as from September 28th on Canal+

Best series & films as from September 28th on Apple TV

Best series & films as from September 28th on Disney Plus

Best series & films as from September 28th on Starzplay

At age 14, young orphan Catherine marries into the 16th century French court. Despite her status as a commoner, her uncle, Pope Clement has negotiated a substantial dowry and geopolitical alliance in exchange for the union, and with it, the expectation of many heirs. However, on her wedding night, Catherine discovers that her husband is in love with Diane de Poitiers, a beautiful lady-in-waiting twice her age.