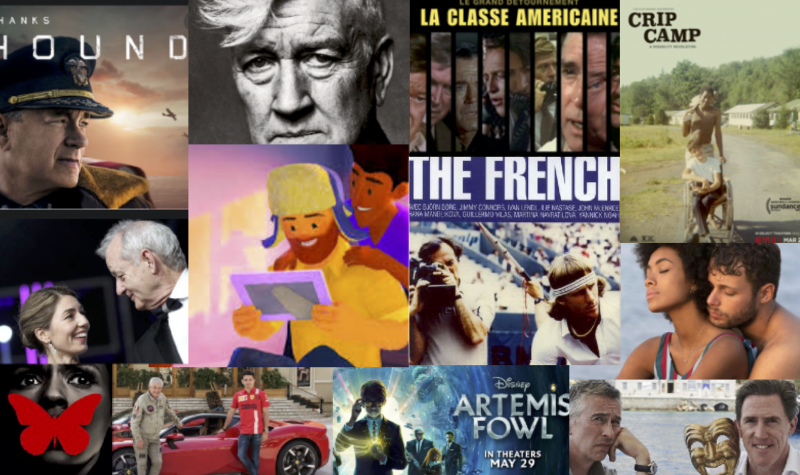 Series, movies, what to watch in June

New series, new movies and new documentaries are coming out in June. Meanwhile movie theaters are closed, there is a great deal of possibilities.

David Lynch released a short movie on Youtube (link in the article below), I watched a great documentary of Timothy Chalamet. And Claude Lelouch is to release a new movie on Canal+ (more in the article).

Don’t forget new series on your platforms and the festivals which will open in June (Champs Elysées Film Festival, Annecy ‘s International Film Animation festival) and the global movie on line festival, We are One, a global film festival now on line.

What to watch in June: movies and series

The famous  “I can’t listen to that much Wagner. I start getting the urge to conquer Poland” is one of his best lines.

There is also a tribute to two great movies: Double Indemnity by Billy Wilder and The Lady from Shangai by Orson Wells. Woody Allen managed to blended genre comedy, with, sometimes,a film noir atmosphere. Zach Braff (the hero of the series Scrub) plays the son. We also meet Anjelica Huston, sensational, who plays a writer published by Woody Allen .
This movie is a great moment of pleasure, with a great end. You should watch it  now.

In a very different style, Alex Pina, the creator of La Casa de Papel gives us some good moments  in Ibiza. The story of Zoé investigating the death of her brother missing for twenty years is both light and dramatic. We discover an island where everything is possible and we are touched by the story of this woman who does not know who she is and what she really wants.

Both shot  in Spanish and English, the photography of this series is beautiful, by Kieran McGuigan. Alex Pina pays tribute to Jean-Luc Godard in one episode of the series with Breathless quoted by one of his character and in non-cliché way. If you found who is the character, write me to contact@movieintheair.com.

Zoé is played by Laura Haddock (Da Vinci’s Demon), and I really loved the character of Boxer, played by Nuno Lopes (Une fille facile, Chamboultout). Tom Rhys Harries is perfect, whom I discovered in The Gentlemen (last movie directed by Guy Ritchie). The all cast is great.  Even if this series could have been shorter and is far from the strength of La Casa de Papel, I enjoyed it very much.

Interview of Scott Derrickson, co-writer and director of Doctor Strange.

A dialogue from Casablanca

David Lynch has his own Youtube Page : David Lynch Theater. He added a new short movie on May 20th, free on line:

Le grand détournement, la classe américaine de Michel HAZANAVICIUS & Dominique Mézerette is to watch fully on line on Youtube. Soon a book on the best lines will come out.

Trip to Greece, a friendship story during a holiday in Greece,  now available on Youtube

now and in June on Netflix

Documentary : Crip Camp: a disability revolution, produced by The Obama’s.

Trois mètres au-dessus du ciel, adapted from the novel of Federico Moccia: teenagers on holidays on the Adriatic coast…

Don’t forget on Friday: the series Space Force and season 3 of  Fauda will be on line June 4th

Movies & series to watch now and

in June on Disney+

Out , to stream now, with the first gay character in a Disney movie.

Movies, series to watch now and in June on Canal+

Series : In treatment adapted from the Israeli series BeTipul, (watch the documentary I talked about here.

Movies & series to watch now and in June

The French, by William Klein, on the “French Open” tournoi of Roland Garros in 1981.

And new series I was talking about the past few weeks:

Zoey’s extraordinary playlist, directed by Austin Winsberg (known for The Ugly Truth) broadcast on Warner TV, with Jane Levy  (seen in the series What If)

Christopher Nolan, whom I was talking about last week, is to broadcast his new movie Tenet on the video games platform, Fortnite

The movie Greyhoundwill come out on Apple TV, with Tom Hanks.
The story of Ernest Krause, a captain who fought the Nazis and helped the Allied to cross the Atlantic, adapted from the novel written by  C.S. Forester, ‘The Good Shepherd’. Starring Tom Hanks and Elisabeth Shue.

Actors : To watch : A short documentary on Timothée Chalamet

Sofia Coppola has directed her seventh movie, On the rocks, second with Bill Murray, after Lost in Translation. It is supposed to be a drama on the relationship of a father and her daughter played by Rashida Jones (the daughter of Quincy Jones). She played in The Office, Black AF (Netflix). It is supposed to come out on Apple.TV.

Recently, she agreed to adapt a novel from Edith Wharton, The custom of the country (Les beaux mariages in French), for Apple.TV as well.

Paul Verhoeven is to adapt Bel Ami written by Maupassant in a new mini series.

Short films selected and offered by The New York Times

La vertu des impondérables, the last movie directed by Claude Lelouch isto come out on Canal+ as from June 13th

He also did a remake of his first movie “C’était un rendez-vous” (a movie that last 8 mn, a race in Paris) in Monaco. I am looking forward to watching it:

Richard Brody, from The New Yorker advises us to watch Fourteen.

To read: An article about Spike Lee and the Battlefield of American history (The New York Times).

The Gentlemen by Guy Ritchie and Jo Rabbit by Taika Waititi with him, Scarlett Johansson to come out on May 28th

I lost my body by Jeremy Clapin

Listen to this podcast on the show Musique Emoi : Gilles Jacob, former President of the Cannes Film Festival, interviewed by Elsa Boublil