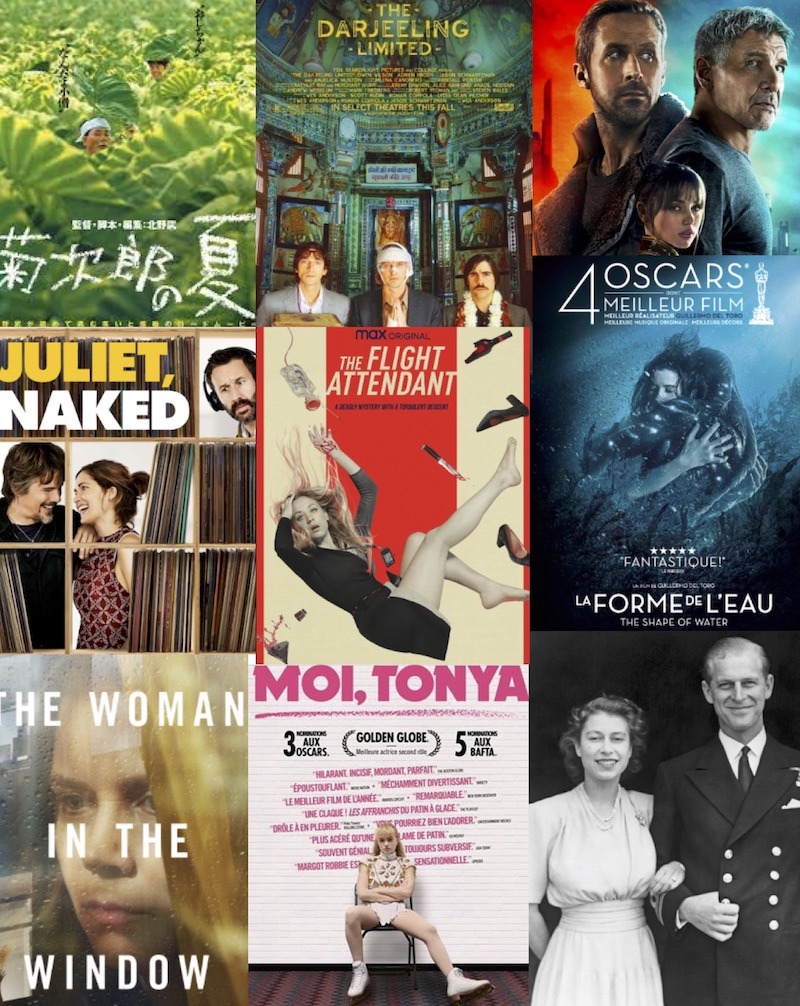 This week, five films to get away.

Michaël Samuels ‘ film tells the true story of the 300 child survivors of the Holocaust who were welcomed into the UK after World War II.

By following the journey of Sophie Leibowitz, a contestant for the 2016 title, Eytan Ipecker questions the spectacularization of the memory of the Shoah for political purposes.

A documentary by Arte 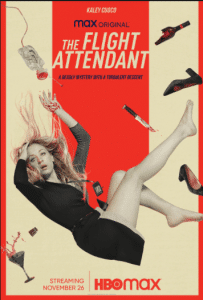 Cassandra Bowden, a flight attendant, wakes up in her Bangkok hotel room, hungover and with the dead body of a man she had an affair with the night before.

Afraid of having to call the police, she decides to go on with her day, as if nothing had happened.

But once in New York, she is questioned by FBI agents. Still having trouble remembering the events, Cassandra begins to wonder if she might be the killer ….

The series: Get away in the air

This series is amazing.

In the first episode, it feels like we’re seeing all the clichés we imagine about flight attendants (to sum up pretty and dumb), which is annoying. But neither the heroine nor the secondary characters confirm this prejudice.

Kaley Cuoco plays this stewardess wonderfully, the heroine of a series whose real subject is alcoholism.

Cassy (Cassandra) does not know how to manage her life, trapped by her past as a young orphan girl to whom her father, also an alcoholic, gave beers on the sly.

Of course, Cassy travels, which gives us the opportunity, while we follow her story, to escape and discover very different cities and countries.

This series, which is funny, sad, fantastic with a mix of thriller, gives a successful cocktail since it has been renewed for a second season.

In 2021, it received the Golden Globes for Best Musical or Comedy TV Series. 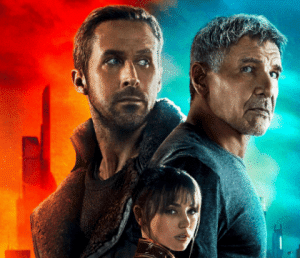 Blade Runner 2049 is the sequel to the first film, Blade Runner, directed by Ridley Scott (producer of this sequel), released in 1982 and adapted from the novel Do Androids Dream of Electric Sheep? by Philip K. Dick.

In 2049, bioengineered humanoids, called replicants, have been integrated into society to ensure the survival of humanity.

K (Ryan Gosling), one of the newest models designed to obey, and works as a blade runner for the LAPD. He is, like Harrison Ford before him, a bounty hunter and eliminates delinquent older models. His only friend is a hologram, Joi (Ana de Armas).

On a farm, he eliminates a former model (Dave Bautista) and discovers by chance a box buried at the foot of a tree.

Forensic analysis reveals that it is the remains (bones and hair) of a replicant who died as a result of complications from an emergency C-section.

Her superior, Lieutenant Joshi (Robin Wright), orders her to destroy any trace that could reveal this discovery, including the child born as a result of the medical procedure.

The film: a spatial and temporal getaway

Much more violent and rhythmic, (the previous one has aged badly unfortunately), Blade Runner 2049 is a prodigy of special effects. The photography is sublime and if Ridley Scott knows how to create universes, they are science fiction ones.

And the script is also better and I challenge anyone to find the end of this enigma that holds us throughout this sequel, where Ryan Gosling shows, once again, his talent.

The music is signed Benjamin Deakins and Hans Zimmer, and transports us to another universe.

To get away on screen for sure

ON NETFLIX ON APRIL 14 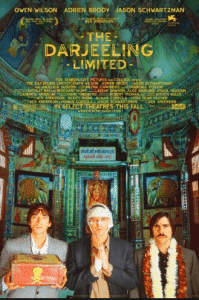 Three brothers, Francis, Peter and Jack, take a long train journey through northern India one year after the death of their father.

They have not seen each other for a long time but they all want to find their mother, who is cloistered in a Himalayan convent.

The film: a total getaway to India!

Between adventures, comedy and moments of brotherhood, this beautiful film by Wes Anderson takes us on a spiritual journey through India.

This train-movie is a great opportunity to reunite these three actors that are Owen Wilson, Adrien Brody, Jason Schwartzman, perfect in their characters, very different from each other. 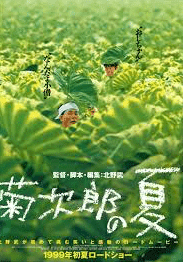 A nine year old boy named Masao, who lives alone with his grandmother, finds by chance pictures of his mother whom he has not seen for a long time.

With the help of a former yakuza named Kikujiro, Masao decides to go on a trip to find her.

The film: a poetic road trip to get away in Japan

Kikujiro is both tender and poetic, in the vein of what Takeshi Kitano did with A scene at the sea which I loved (the story of a deaf dustman who dreams of learning to surf). He adds to it a mix of deadpan.

The child-yakuza duo (the bandits dear to the director), makes improbable meetings and works wonderfully.

It seems that the director was inspired by the Wizard of Oz.

With Takeshi Kitano and Yusuke Sekiguchi

TO SEE NOW ON ARTE.TV

AND A DOCUMENTARY ABOUT TAKESHI KITANO : Citizen-kitano 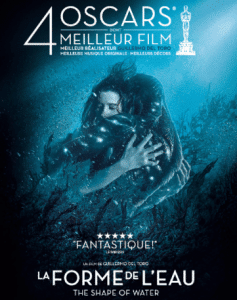 THE SHAPE OF WATER

Without family, Elisa Esposito (Sally Hawkins) was found as a child in a river. She lives alone, and her only friends are her elderly neighbour Giles (Richard Jenkins), an unemployed advertising illustrator, and her co-worker Zelda (Octavia Spencer), who acts as a translator between Elisa and their superiors.

In 1962, during the Cold War, the Americans are in the midst of a space struggle with the Soviets. Elisa works as a cleaning lady in a government laboratory in Baltimore.

The brutal, self-important, positive-thinking Colonel Richard Strickland (Michael Shannon) has just brought back from South America an amphibian humanoid (Doug Jones) that he captured in an Amazon river where the natives worshipped him as a god.

By chance, Elisa and the amphibian humanoid become friends.

The film : to get away in love and water

I loved this film. The story is poetic, magical and at the same time very hard (inspired by Beauty and the Beast, of course).

There are moments of humour in between the hardest scenes. References are multiple, and the way of filming, so close to the characters, is gripping. And the photography and colours reinforce the dreamlike atmosphere of the film (all that water!), and the special effects will put stars in your eyes.

The score composer by Alexandre Desplat is amazing.

Film The Shape of water  won four Academy Award in 2017.

The United States vs. Billie Holiday

An American film directed by Lee Daniels (“The Butler” and “Precious”).

It is a biographical film about the singer Billie Holiday (1915-1959), adapted from the British non-fiction book Chasing the Scream: The First and Last Days of the War on Drugs by Johann Hari (2015).

The reason? Her famous song “Strange Fruit” – an anthem about the lynching of African-Americans across the Atlantic.

To prevent her from singing her poignant indictment, the Federal Narcotics Bureau tried to convict her by targeting her weak point: her heavy drug use.

Jimmy Fletcher,  will then infiltrate the inner circle of the iconic singer to catch her at fault. But he will quickly fall under her charm.

10 Of The Best Tools For Writers. According to our friends here on Medium  by Shaq Cheris

Dominique Besnehard: “Today, actors are no longer sure to last” 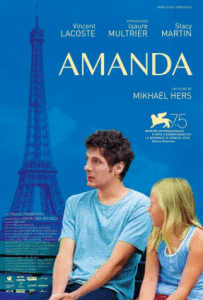 Canal Plus : Let them all talk (la grande traversée)

Through the friendship between the actress Delphine Seyrig and the video artist Carole Roussopoulos, their struggles and their subversive images, a vibrant tribute to the “enchanted” feminism of the 1970s, joyous and crazy.

New series, adapted from the novel by Elliot Colla and directed by Stephen Butchard.

Fleming: The Man Who Would Be Bond is a British mini-series in four 44-minute episodes, created by John Brownlow and Don MacPherson.

This mini-series tells the story of the life of the author who would enthrall millions of readers with the adventures of 007.

How to steal a Million by  William Wyler, with Audrey Hepburn, music by John Williams

Professor Marston and the wonder women, on April 2Oth, by Angela Robinson

Zéro, on April 21st, by Menotti

A shy teenager with the ability to make himself invisible must master this power to defend his neighborhood, at the expense of his artistic ambitions.

Jupiter’s legacy, on May 7th

The series adaptation of the graphic novels by Mark Millar (Kingsman, Kick Ass…)

The Woman in the window, on May 14th, directed by Joe Wright

It is an adaptation of the novel of the same name by A. J. Finn.

In New York, Dr. Anna Fox is a child psychologist. Agoraphobic, she never leaves her house. When the Russell family moves in, she starts spying on them. She will then witness a crime.

British-American film directed by Jesse Peretz, released in 2018. It is the film adaptation of Nick Hornby’s novel of the same name.

Annie Platt (Rose Byrne) plans to escape her hometown of Sandcliff, England, her job as a curator at a local museum, and her unhappy relationship with Duncan (Chris O’Dowd), a university professor obsessed with Tucker Crowe (Ethan Hawke), an American musician last heard from in 1993.

Annie and Duncan argue about its quality, and Annie writes a negative review on Duncan’s Crowe fan site.

Crowe himself emails Annie, thanking her for her honesty, and they exchange correspondence.

Margot Robbie in – I, Tonya  is an American biographical film directed by Craig Gillespie, released in 2017. In the form of a mock documentary, it tells the true story of the Harding-Kerrigan affair between two American figure skaters in 1994.

This low-budget film, released in December 2017, won several awards at the Golden Globes and Oscars, especially with awards for Margot Robbie, the lead actress, and Allison Janney, supporting actress.

City on a hill (now)

Listen to the French podcast about  Gal Gadot.

The Banker, by George Nolfi

Blue, a documentary on ocean