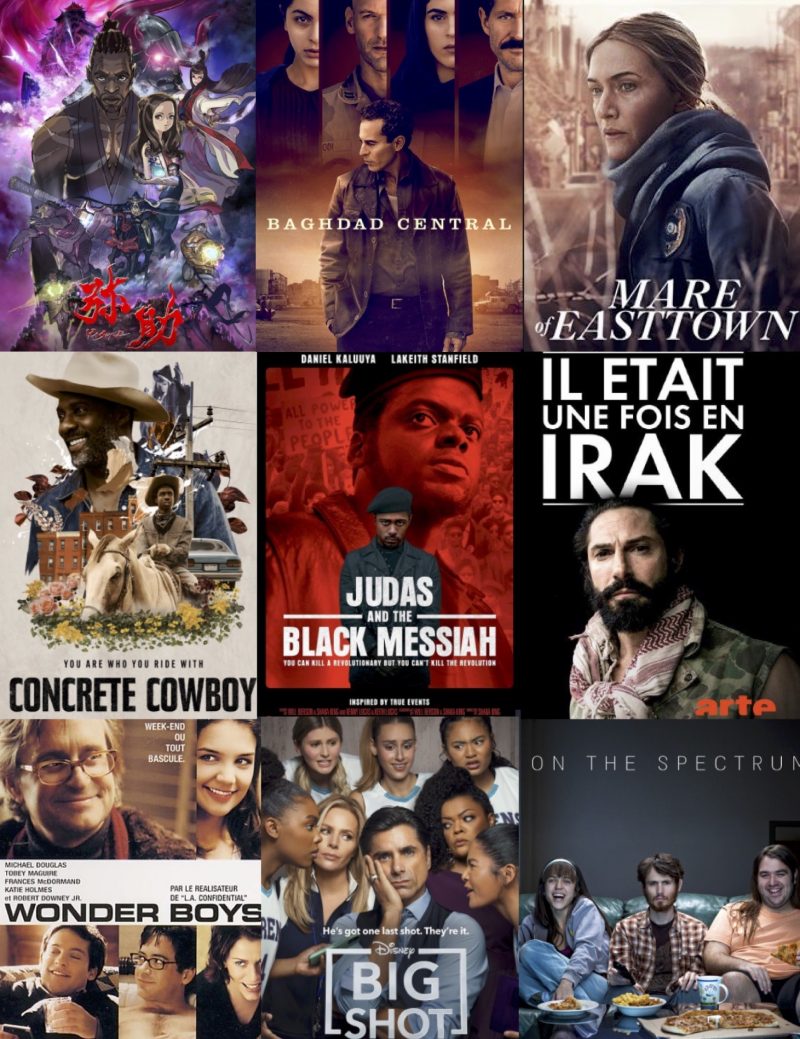 Your films about rebellion

This week, your films are about rebellion. 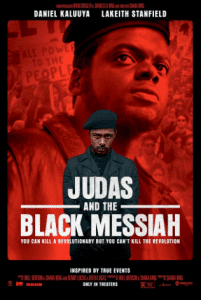 Judas and The Black Messiah

Directed by Shaka King, based on a story by Kenny Lucas and Keith Lucas

He is caught red-handed in 1966 with a fake FBI agent’s card. Special Agent Roy Mitchell of the FBI, offers to drop the charges against him if he works undercover for the bureau.

O’Neal is assigned to infiltrate the Illinois section of the Black Panther Party (BPP) and its leader, Fred Hampton.

Judas and The Black Messiah alternates between the testimony of Bill O’Neal, nicknamed Wild Bill by his “friends” in the BPP, on television in 1989, a traitor to the BPP, and the events that took place between the beginning of his infiltration in 1966 and the assassination of Fred Hampton in 1969.

Fred Hampton, played by Daniel Kaluuya (Get Out) is inhabited. He plays this angry man, in total rebellion against the American society of the time, where police violence is daily.

Very young, Fred Hampton joins the BPP and in order to amplify the revolt salted with the gangs. He sets up a free school and clinic for all members.

He shows that racism is a pretext to partition the classes and to show that the real struggle is social. His oratorical jousts galvanized the crowds. Little by little, American Latinos and the underprivileged white classes joined him.

Fred Hampton meets his companion Deborah Johnson, (today Akua Njeri), played by Dominique Fishback, during a meeting.  She was a poet. Poetry, words and the cause bound them.

Edgar Hoover wanted the definitive death of the party and its leader, played here by Martin Sheen.

On December 4, 1969, police officers entered the house where Fred Hampton was sleeping and murdered him while he was sleeping. The assassination was made possible by the treachery of Bill O’Neal, who had become Fred Hampton’s bodyguard.

99 shots were fired by the police and to top it all off, the BPP members were charged with attempted murder of the police.

Many members of the BPP as well as Fred Hampton and Mark Clarck, who headed the section, were murdered.

Fred Hampton was twenty-one years old. His wife, eight and a half months pregnant, was nineteen. She is still alive today and her son continues the sadly necessary fight against police violence.

The survivors and mothers sought compensation in 1971, and it was not until 1982 that they were paid $1.85 million, and pointing to a “conspiracy to deny the Black Panthers their civil rights”.

The “Judas” Bill O’Neal, played by Lakeith Stanfield and Jesse Plemons as Roy Mitchell, both play their roles perfectly, ambiguous for Bill O’Neal, as an agent who does his duty are both perfect.

This film deserves all the superlatives that lead to six nominations at this year’s 93rd Academy Awards, including Best Feature Film, with Stanfield and Kaluuya both nominated in the Best Supporting Actor category.

We will see the results  on April 25.

For his performance, Kaluuya won Best Supporting Actor at the Golden Globes, Critics’ Choice Award, Screen Actors Guild Awards, and was nominated for a BAFTA Award.

The soundtrack is incredible, composed by Mark Isham and Craig Harris. 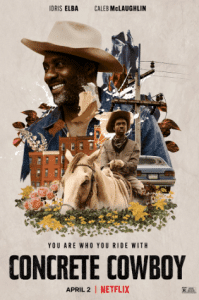 Directed by Ricky Staub, adaptation of the novel Ghetto Cowboy by Greg Neri.

Cole is a bad student. For the umpteenth time, his mother picks him up from the high school where he was expelled for fighting. When he gets in the car, Cole discovers a bag with his clothes in it.

His mother drops him off at his father’s house in suburban Philadelphia. And when he enters the room where he lives, Cole discovers that his father lives with…a horse.

The story takes place in a community of urban African-American cowboys for once in a genre (yet another one!), the Western, largely dominated by white representation.

In Concrete Cowboy the father, Harp, played by Idris Elba and the son Cole (for Coltrane), played by the brilliant Caleb McLaughlin (“Stranger Things”) do not know each other.

The son, Cole, is angry at him for not taking care of him and the father is silent. He is only interested in horses.

Cole, in the midst of his rebellion, wanders around at night with a childhood friend who is a drug dealer. By day, he cleans the stables and grows fond of the horses.

Just as in The Mustang, where the character found salvation in a mustang, Cole is the only one who can get close to a devious horse and becomes fond of it and these people, lost cowboys whose only love is their horse and their community.

Ricky Staub filmed people -most of them not actors – who still live in the last remaining barns in the Philadelphia suburb of Fletcher Street and who, as real estate grows, are being driven out and forced to move.

This rebellious, very poor, freedom-loving community finds resilience in its love of horses and is filmed sublimely. The light, the colors and the camera close to the characters, to these abandoned places, take us to the heart of this story where paternity, redemption and discovery of freedom and adventure thanks to the horse are mixed. 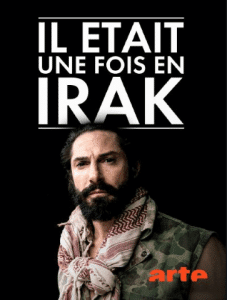 Directed by James Bluemel, on Arte.tv till March 2022

This documentary in three parts, The War-Insurgency-Consequences, is extraordinary.

It looks back at the weeks leading up to the 2003 U.S.-British invasion, the chaos left after they left until the arrival of Daesh in 2017, and their situation today.

For more than three hours, civilians, Iraqis, military personnel and war reporters testify about the atrocities they suffered, saw or committed, about their daily lives for fifteen years.

Waleed Rabiah, a fan of America before 2003, tells how his fascination with the West turned into a nightmare when civilians were massacred. Omar Mohammed, a young historian, tells how he was secretly filming (called Mosul Eye, no one knew his réal name) the exactions of the jihadists before being forced to leave. He is only 33 years old today but has already lived through everything… A former adviser to Saddam Hussein and a woman farmer, all testify to this period.

“Having arrived with the hope of helping to rebuild a democratic Iraq, Lieutenant Colonel Nate Sassaman has seen his efforts at dialogue reduced to nothing over the months. Broken by the feeling of having contributed to the destruction of a country, he left the army today. Among the soldiers who flushed out Saddam Hussein was an Iraqi volunteer who had taken refuge in the United States. Now a car salesman, Samir al-Jassim remembers what it felt like to face the deposed dictator. Dexter Filkins describes the rise of the attacks, after the decision to “de-Baathize” the country, followed by the demobilization of some 400,000 soldiers, completed the groundwork for the insurgency. Soon after, the journalist, who teams up with Ashley Gilbertson, accompanies soldiers in the terrible battle of Fallujah. A young mother, Nidhal Abed, and her 2-year-old son were unable to leave the city, like most poor families…” (source: http://www.film-documentaire.fr)

An essential must-see documentary, which received the Best Documentary Award at the Rose d’Or International Festival in December 2020.

The link to watch this documentary here

Chains of fools, by Susan Lori-Parks, with Cynthia Erivo

Exterminate all the brutes, by Raoul Peck

How They Write a Script: Billy Wilder  by Scott Myers 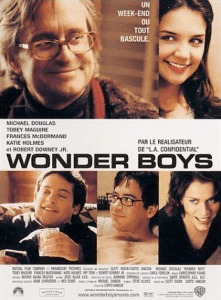 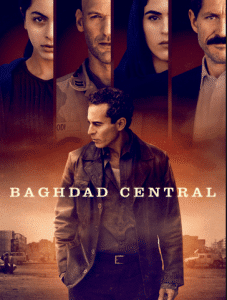 Through the friendship between the actress Delphine Seyrig and the video artist Carole Roussopoulos, their struggles and their subversive images, a vibrant tribute to the “enchanted” feminism of the 1970s, joyous and crazy.

New series, adapted from the novel by Elliot Colla and directed by Stephen Butchard.

How to steal a Million by  William Wyler, with Audrey Hepburn, music by John Williams

The Irregulars, by Tom Bidwel

Professor Marston and the wonder women, on April 2Oth, by Angela Robinson

Frank of Ireland, on April 16th with Domhnall Gleeson

City on a hill (now)

A teacher , by Hannah Fidell

Listen to the French podcast about  Gal Gadot.

The Banker, by George Nolfi