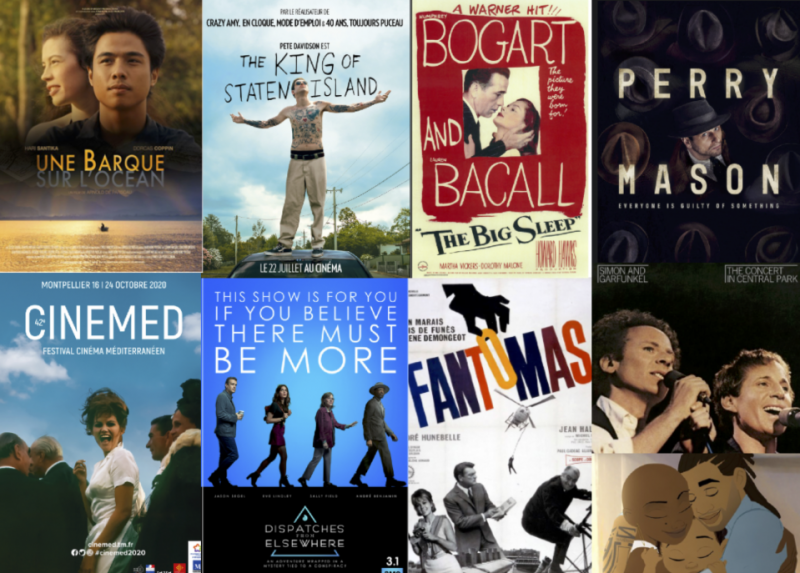 All the news about movies, series and festivals.

Here are the latest news in cinema, series to see or watch again, films on television and on your platforms and a lot of festivals. This week, one theme, thrillers, and many film events to come.

Shoot your day of July 25th  for a documentary participative contest by Ridley Scott.

The King of Staten Island

In the movie theater Le Balzac 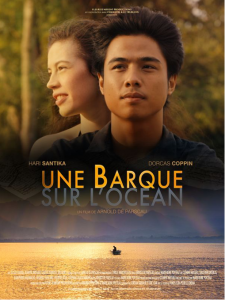 Still in your movie theaters 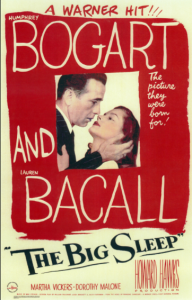 From the very first images, I remembered the reading of Raymond Chandler‘s novel and Philip Marlowe character, a tribute to the playwright Christopher Marlowe, initiated by the author Dashiell Hammett, a universe that all filmmakers and writers have been trying to recreate since the creation of the thriller, Woody Allen included.

Philip Marlowe embodies the private detective, a not very prestigious function – in general he’s a man, lost, more or less worn on the bottle and who gets beaten up at least once a week, but whom Raymond Chandler has managed to make sympathetic and even classy, especially in the interpretation of Humphrey Bogart, one of his best in The Big Sleep (see also Casablanca of course, Key Largo, The Maltese Falcon…).

The private detective is cynical, a stud -but he resists- integrity, he makes the difference between what is legal and what is right (says Perry Mason, read below about whom I speak below). Robert Mitchum also played the character of Philip Marlowe, one of the best roles of the great actor.

The story of The Big Sleep, that of a private detective charged with finding the blackmailer of a rich industrial magnate’s daughter, takes us on a time travel, a dark universe, where women don’t only have the role of a vase – the scene with the bookseller – and homosexuality, which was taboo at the time, is addressed – not in the film, alas, but in the novel.

The spectator no longer gets attached to the plot – complicated to stage – Raymond Chandler confessed that he didn’t know what became of one of the characters – but to the dialogue – and some scenes are even funny and don’t appear in the novel.

Director of Men prefer blondes, Scarface, The Big Sky, Rio Bravo, Bringing up Baby, Only Angels have wings, Howard Hawks has tackled all genres in film: thrillers, western, musicals, peplum and discovered Lauren Bacall at the age of nineteen. He directed her in To have and to have not, adapted from Ernest Hemingway’s novel (a possible challenge between the director and the writer) and during the shooting, Lauren Bacall met Humphrey Bogart. William Fauklner and Jules Furthman were the screenwriters of the adaptation.  Howard Hawks died on December 26, 1977, the day after the death of Charles Chaplin.

Lauren Bacall is sublime and shows her love for Humphrey Bogart– who at the time was leaving his wife for the beautiful actress – and the puns and allusions are numerous (see the famous: “You have class but do you keep the distance? “It all depends on who’s in the saddle” or  “What’s wrong with you? Nothing you can’t fix”).
The dialogues between the two actors are reminiscent of a ping-pong game where the ball would never fall. The work of Raymond Chandler and the screenwriters make it a masterpiece. There are no lines to add or delete. 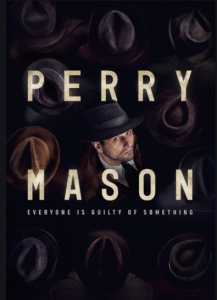 Adapted from the novels of Erle Stanley Gardner, Perry Mason tells the story of a private detective traumatized by World War I. The writer was a former lawyer who fought for the rights of Mexicans and Chinese. As they had little money to pay him, he started to write and has published more than one hundred detective novels, among which Perry Mason, the most famous one, written between 1933 and 1973.

The series was adapted to the screen for the first time in 1934 and played by Warren William, then from 1957 until 1966 with Raymond Burr (who played in Rear Window, the series Ironside) in the lead part. Erle Stanley Gardner, present at the casting found in him the perfect Perry Mason.

This year, it has been adapted again  by Rolin Jones and Ron Fitzgerald and recently broadcasted on HBO and Canal+.

Matthew Rhys plays the lead role. Perfect in the role, I had seen him in The Americans and recently in The Extraordinary Mr Rogers, he plays perfectly a broken man, deeply affected by the absence of his son entrusted to his mother, and brave, even reckless when it is a matter of solving an investigation to restore justice.

The thriller on screen

In the city of Los Angeles, as around the world, people are facing an unprecedented economic crisis. The kidnapping and murder of a baby makes headlines. Who’s the culprit?

As I wrote before, Perry Mason makes the difference between what is legal and what is right. He regularly gets beaten up, drinks, is angry and uses violence if necessary. He is obsessed with a quest for absolute truth.

In this first season, Perry Mason must find the culprit of the kidnapping and murder of a baby.
All the characters are obsessed by the investigation. They will risk their life and jeopardize the life of their family to discover the truth.
There is the old lawyer, E.B., obsessed by this last case of his career, played by the incredible John Lithgow (actor of Brian De Palma‘s movies, Blow Out, Obsession, and the charismatic Winston Churchill in the series The Crown), his partner, a young homosexual woman played by Juliet Rylance, and Perry Mason and his partner, Pete, played by Shea Whigham.

The homosexuality, the racism of which are victims of African-Americans and Mexicans, the mistress of Perry Mason played by Veronica Falcon and the policeman played by Chris Chalk, and the prejudices on women, are tackled in this series where religion returns on the front of the scene. A woman thinks she is the voice of God on earth and will have a role to play in the investigation…

It’s one of the strongest series right now. In the history of detective fiction,  has inspired jazz composers. Jazz is present all the time, the music reminds us of an alliance between Chet Baker and Miles Davis – and it is composed by the great Terence Blanchard, composer of Spike Lee’s movies.

Perry Mason must have inspired James Ellroy novels  (L.A. Confidential, The Black Dahlia) and shows, in addition to the loss of innocence, the violence of a city with corrupt leaders in which men and women fight, in love with justice, and in search of truth.

3. GOOD MOVIE TIPS FROM THE PROFESSIONALS 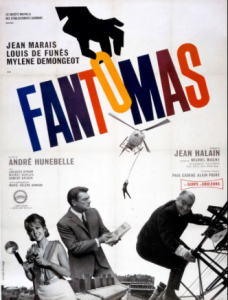 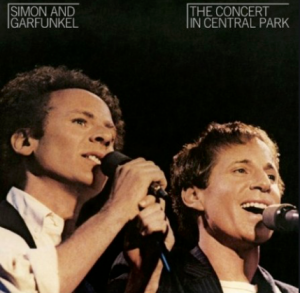 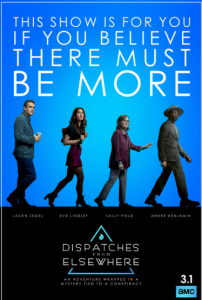 All episodes of Mad Men

Dispatches from everywhere, by Jason Segel, as from July 24th, with Jason Segel and the great Christopher Walken.

4. NEWS ABOUT THE MOVIE INDUSTRY 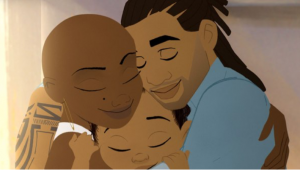 Netflix : the most expensive movie of the platform with Ryan Gosling et Chris Evans
Link

Bruce Willis in a new movie Trailer To watch in the movie theaters: August 28th

On Spotify, podcasts by Michelle Obama as from July 31st.

The best 30 books about movies.

The movie actors of ARP are going for podcasts

The New York Times increases its investment in Tv production 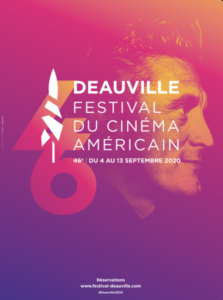 Cannes Classics 2020: program:the festival will be part of le festival Lumière of Lyon (10/18 October 2020) and during the Rencontres Cinématographiques de Cannes (23/26 November 2020).

At the Cinémathèque Française, the exhibition about Louis de Funès has started and will last till May 31st, 2021

The Dardenne Brothers will receive the 12th prix Lumière in Lyon.

The Deauville American Film Festival has released its selection.

The Festival of French Film in Angoulême will take place from August 28th till September 2nd.

Filmmaker Ann Hui and actress Tilda Swinton will receive a Golden Lion for their entire career in Venice during the 77th edition of the festival.

The next Cinemed festival will take place in Montpellier from October 16th to 24th, and will pay tribute to the Italian filmmaker Fellini, who would have turned 100 this year and whose films will be restored in 4K.

Enjoy the watching and