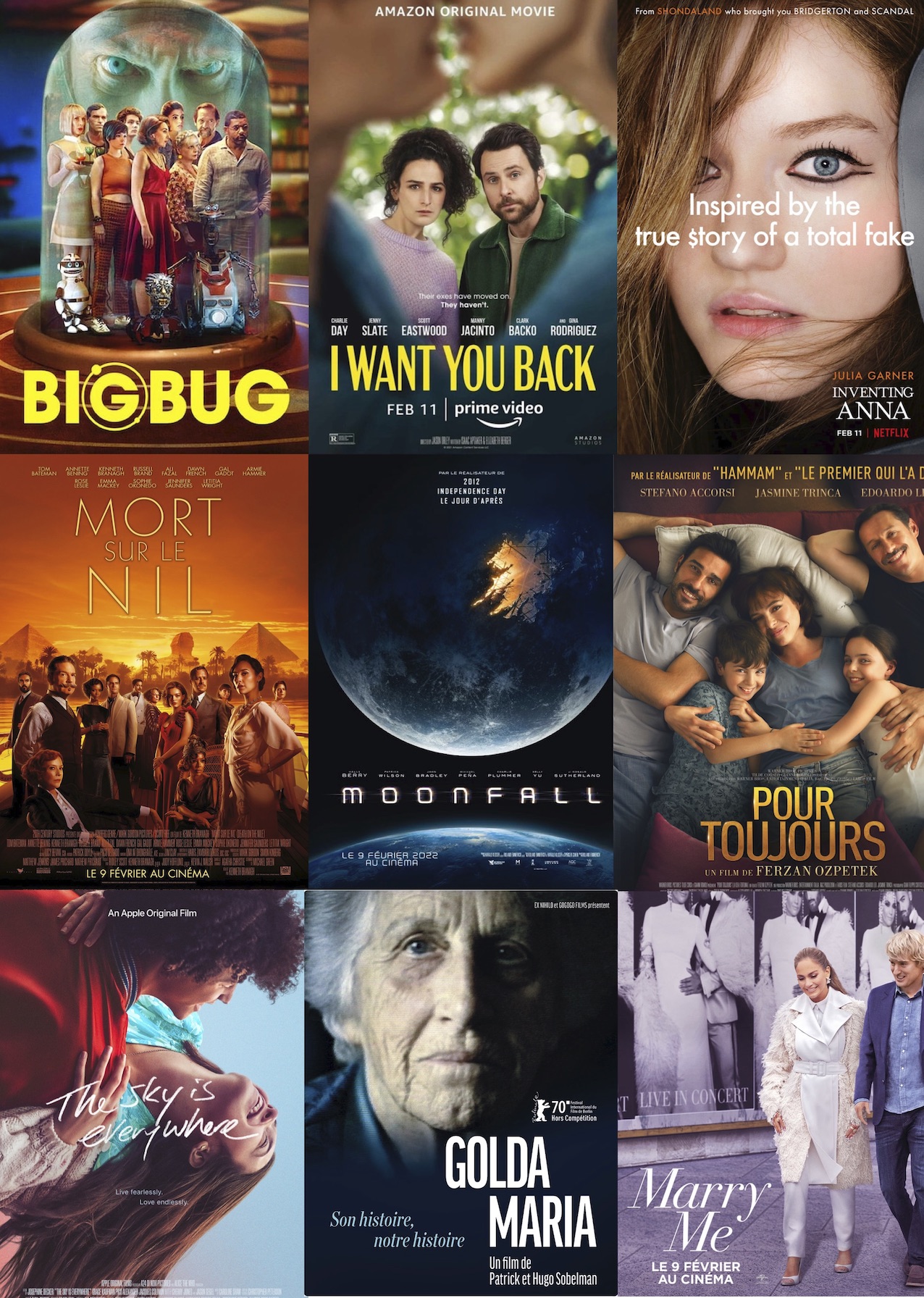 Best movies as from February 9th

Your new films, series in theaters & on your platforms

What are the best movies as from February 9th?

Answer in this article 😉

Has the Netflix platform already won the Oscar battle?

The Power of the Dog by Jane Campion, broadcast on the platform (review here) is nominated 12 times for the Oscars this year including: best film, best director, best actor, best supporting actress (Kirsten Dunst) and best actor.

Incredible for a film that very few lucky people have seen in theaters!

What about the other nominations?

– 10 nominations for “Dune” by Denis Villeneuve, but not for the direction

– 7 nominations for “Belfast” by Kenneth Brannagh and “West Side Story” by Steven Spielberg.

The nominations (in bold, my predictions/wishes!)

“The Power of the Dog”

Jane Campion, “The Power of the Dog”

Jessica Chastain, “In the Eyes of Tammy Faye”

Nicole Kidman, “Being the Ricardos”

Javier Bardem, “Being the Ricardos”

Benedict Cumberbatch, “The Power of the Dog”

Will Smith, “The Williams Method”

Denzel Washington, “The Tragedy of Macbeth

“School at the End of the World (Bhutan)

A series on the film “The Godfather” is currently being produced.

Entitled “The Offer”, it follows producer Albert S. Ruddy – the real-life character being executive producer of the series – and Paramount boss Robert Evans as they make a feature film about the Italian mafia in the United States. Dan Fogler plays Francis Ford Coppola in this ten-part series.

The cast: alongside Miles Teller and Matthew Goode, Juno Temple, Giovanni Ribisi, Colin Hanks, Patrick Gallo as Mario Puzo – the writer of the original novel – and Anthony Ippolito as Al Pacino. The series was directed in part by Dexter Fletcher, created by Michael Tolkin and showrun by Nikki Toscano. (source: Première).

“The Godfather” is released again in theaters on February 23.

Steven Spielberg hires director David Lynch to star in his upcoming autobiographical film The Fabelmans, due out November 23. The creator of Twin Peaks joins the cast alongside Michelle Williams and Paul Dano.

FESTIVAL AS FROM FEBRUARY 9TH 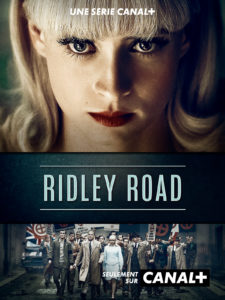 Vivien, a young woman from Manchester’s Jewish community, abandons her home and family after learning that her parents plan to marry her off against her will.

She travels to London to find Jack, her longtime love. She eventually discovers that he has joined an anti-fascist movement, which fights against English neo-Nazis.

Living in a shared flat and working as a hairdresser, she witnesses the violence committed by the far right…

A true story in 4 episodes

Thrilling, terrifyingly relevant, this series looks back at a not so glorious period in the history of England, where, in addition to the swinging London, the era was marked by the rise of a fascist current openly claiming to be of the Third Reich, displaying Nazi flags in the streets, exploited by the National Socialist Movement and its leader, Colin Jordan.

Unknown, the story is nevertheless true, adapted from a book by Jo Bloom, Ridley Road, published in 2014.

Young Jews belonging to an anti-Nazi organization, the 62 Group, infiltrated the neo-Nazi party while some of the British police were complicit or inactive in the attacks on Jews.

During a meeting in Trafalgar Square, its supporters set fire to a yechiva, a center for the study of Torah and Talmud in Judaism, and caused the death of a student without being bothered by the police.

This is where the young Vivien (Agnes O’Casey) arrives, dyeing herself blonde to infiltrate this party, hoping to avoid the attacks and find evidence of their actions.

These four episodes with a clear narrative and scenario, impeccable actors, and scenes mixed with archival footage that accentuate the realism of this story, comes, hopefully, at the right time in a presidential campaign poisonous, left and right.

Currently on Canal Plus. Four episodes. 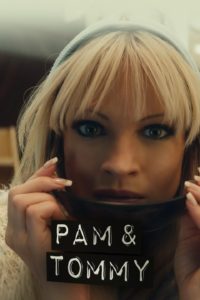 In 1995, the actress Pamela Anderson and the drummer Tommy Lee get married while they know each other for only four days.

During their honeymoon, they film a sex tape.

Later, they decide to build their dream villa. But Tommy changes the plans every week and fires his workers who he doesn’t want to pay. One of them decides to take his revenge and breaks into the villa. He discovers the sex tape…

On paper, nothing let us think that this series would be both very accurate on the psychological level, the intrusion of the media in the private life and especially feminism.

Raped three times in her youth, Pamela Anderson was the luscious blonde everyone dreamed of but did what was expected of her to go further. But alas, the roles she was offered were always the same.

This series pays tribute to the one who saw her intimacy revealed on the net to the whole world (with her husband’s of course) when the internet was in its infancy. A sex tape that had devastating effects on her couple and her pregnancy …

Craig Gillespie, director of Cruella and the excellent I, Tonya, knows how to film female characters and bring all their complexity to the screen. 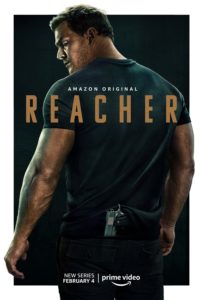 A former member of the military police, Jack Reacher has left the U.S. Army. He now travels around the country and survives on odd jobs. While in the small town of Margrave, Georgia, he is arrested for a crime he did not commit.

Reacher is a series adapted from the novels by Lee Child featuring the character of Jack Reacher.

The first season is based primarily on the very first novel in the series, Killing Floor, published in 1997.

Alan Ritchson, with his impressive physique, is closer to the vision of the character presented in the novel, than Tom Cruise in the two feature films Jack Reacher and Jack Reacher: Never Go Back.

If the plot is classic in the police series theme, the dialogues and the characters are much less so, for our great pleasure.

Alan Ritchson, a kind of modern-day Lucky Luke, taciturn and funny at the same time, plays remarkably Jack Reacher – known as Reacher -, this American army veteran with hidden wounds, a kind of mix between Sherlock Holmes and the Terminator, with an offbeat sense of humor.

He is assisted by the feminist detective Roscoe Conklin, played by Willa Fitzgerald (Emma Duval from the TV series Scream), the only female detective in a police station and a conservative city. The exchanges between the former military man and the feminist are a pure delight throughout the episodes.

Finally, there is Oscar Finlay the chief detective, played by Malcolm Goodwin, whose past is unknown…

These four well-cast characters take us into this police series where in each episode, we must be wary of appearances.

TO WATCH IN YOUR MOVIE THEATERS AS FROM FEBRUARY 9th

Death on The Nile, Kenneth Brannagh

Under the rule of Margaret Thatcher, the story of Buddy a little boy and his family in the Belfast of the late 1960s.

The desperate Hour, by Phillip Noyce. It stars Naomi Watts as a woman who desperately rushes to save her child after police quarantine her hometown due to an active shooter incident.

No Exit is an upcoming American thriller directed by Damien Power from a script by Andrew Barrer and Gabriel Ferrari, based on the 2017 novel of the same name by Taylor Adams.

Produced by 20th Century Studios, the film stars Danny Ramirez and Dennis Haysbert and is scheduled for release on Hulu on February 25, 2022.

Writing and the Creative Life: Why Your Brain Loves Good Storytelling (Part 4) by Scott Myers

How They Write A Script: Stirling Silliphant  by Scott Myers

4. BEST SERIES & MOVIES ON TV, AS FROM FEBRUARY 9TH

5. BEST MOVIES AS FROM FEBRUARY 9TH  ON ARTE

Exterminate all the brutes, by Raoul Peck.

Best movies as from February 9th on Netflix

Best movies as from February 9th on Prime Video

I want you back, by Jason Orley, on February 11th.

In the heart of the 1960s, a young French spy, Francis Mareuil, meets Lyudmila, a Russian pianist, and falls in love with her.

Best movies as from February 9th on Canal+

Best movies as from February 9th on Apple TV

Suspicion, by Rob Williams, based on the Israeli thriller series False Flag. With Uma Thurman. Now.

The Sky is Everywhere, by Josephine Decker, written by Jandy Nelson, inspired by the eponymous novel. On February 11th.

The Last Days of Ptolemy Grey, by Ramin Bahrani,  with  Samuel L. Jackson, as from March 11th.

Best movies as from February 9th on Disney Plus

How I met your father, series by Isaac Aptaker & Elizabeth Berger, on March 9th

Best movies as from February 9th on Starzplay