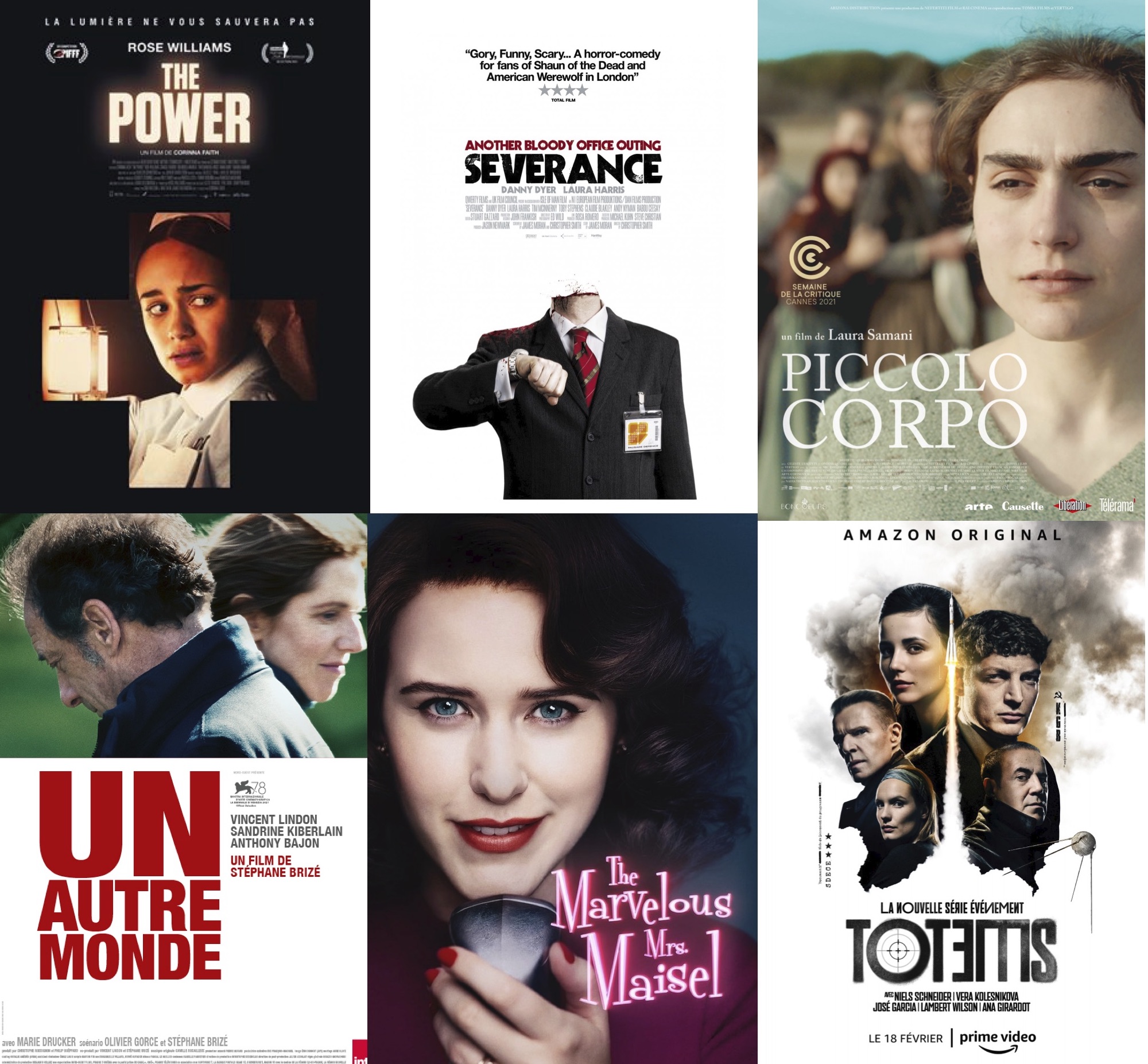 Best movies as from February 16th

Your new films, series in theaters & on your platforms

What are the best movies as from February 16th?

Answer in this article ;).

In addition, the Academy Awards have announced the creation of a People’s Choice Award that will celebrate the most popular film of the season next month, as determined by a Twitter vote.

After an extensive, yearlong and globe-spanning search, Kingsley Ben-Adir, fresh off of playing Malcolm X in “One Night in Miami,” has been tapped to portray a different icon, the music legend credited with popularizing reggae music.

The best-selling novel Dear Edward will become a series for Apple TV+, as just announced by the company.

Connie Britton, Taylor Schilling, Colin O’Brien and other actors will star in the series. “Dear Edward” tells the story of Edward Adler (played by O’Brien), a 12-year-old boy who survives a tragic plane crash in which all the other passengers, including his family, die.

The series will be written by Jason Katims, who will also serve as executive producer with his True Jack Productions alongside Jeni Mullein. There are currently no details on when the series will launch on Apple TV+.

Has the Netflix platform already won the Oscar ?

The Power of the Dog by Jane Campion, broadcast on the platform (review here) is nominated 12 times for the Oscars this year including: best film, best director, best actor, best supporting actress (Kirsten Dunst) and best actor.

Incredible for a film that very few lucky people have seen in theaters!

What about the other nominations?

– 10 nominations for “Dune” by Denis Villeneuve, but not for the direction

– 7 nominations for “Belfast” by Kenneth Brannagh and “West Side Story” by Steven Spielberg.

The nominations (in bold, my predictions/wishes!)

“The Power of the Dog”

Jane Campion, “The Power of the Dog”

Jessica Chastain, “In the Eyes of Tammy Faye”

Nicole Kidman, “Being the Ricardos”

Javier Bardem, “Being the Ricardos”

Benedict Cumberbatch, “The Power of the Dog”

Will Smith, “The Williams Method”

Denzel Washington, “The Tragedy of Macbeth

“School at the End of the World (Bhutan)

FESTIVAL AS FROM FEBRUARY 9TH 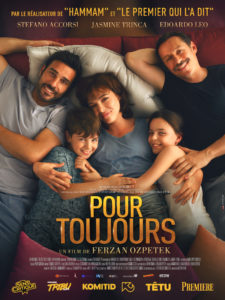 Arturo and Alessandro are going through a period of crisis. Fifteen years of living together have eroded the passion and love that they have for each other.

Anna Maria , Alessandro ‘s mother and mother-in-law, the one who entrusted her two children, had to be hospitalized for examens.

Between misadventures and moments of emotion, Arturo and Alessandro take risks to protect the new love that grows on one side and blossoms on the other.

It begins with a wedding in their beautiful apartment in Rome. A beautiful party on the terrace, laughter and music but between Arturo and Alessandro, the situation is stressed.

At that moment, Annamaria arrives, alone with her children and asks them to keep them for a short time. She has a severe headache and has to have medical examinations.

The arrival of Martina and Sandro, the two children, will change the daily life but especially reveal the flaws of the couple Arturo and Alessandro.

Will they be able to get out of it? How to bounce back once the desire and the years of life spent together lead to a dangerous routine ?

Director Ferzan Özpetek (Hammam, Tableau de Famille, The Window Across the Street, The First One Who Said It), tackles the difficulties that almost all couples face in the long run. The love is still there but the arguments are made with cruel words that hurt because we know the other by heart.

He also comes back to childhood and its traumas on our adult life.

What do they imply? Do we overcome them?

Between drama and comedy, Forever is a very successful and well acted film, which feels good.

Its Italian title La Dea Fortuna is a reference to a sacred place named after the Goddess Fortuna in the city of Preneste (now called Palestrina, it is located in the province of Rome).

“The Goddess Fortuna has a secret, a magic trick. How to make your loved one stay by your side?

You have to stare at her, steal her image, blink your eyes and keep them closed.

The loved one then plunges straight into your heart, and from that moment on, she stays with you forever.”

And Best Actors for Stefano ACCORSI and Edoardo LEO

In all good theaters. 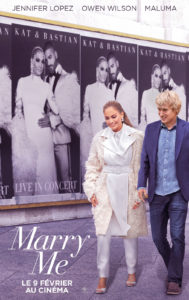 As Kat and Bastian’s inescapable hit single, “Marry Me,” climbs the charts, they are about to be wed before an audience of their fans in a ceremony that will streamed across multiple platforms.

When Kat learns, seconds before the ceremony, that Bastian has cheated on her with her assistant, her life turns left as she has a meltdown on stage, questioning love, truth and loyalty.

As her gossamer world falls away, she locks eyes with a stranger—a face in the crowd and so, in a moment of inspired insanity, Kat chooses to marry Charlie.

Directed by a woman, Kat Coiro, this romantic comedy goes beyond the usual clichés and tells us about two people in search of a true story.

Can we still believe in the couple today?

Like “Pour Toujours”, “Marry Me” asks the question Marry Me” also asks us this question.

While Kat, a famous singer, spends her life filming herself on social networks, Charlie teaches mathematics to passionate students and only believes in the concrete.

Social networks and celebrity today are also what “Marry Me” is about, with the songs of Jennifer Lopez.

The meeting of Charlie and Kat allows us to spend some nice moments.

Owen Wilson is particularly touching in this role of Charlie, as a divorced father a little disillusioned.

TO WATCH IN YOUR MOVIE THEATERS AS FROM FEBRUARY 16th

Italy, 1900. Agata loses her daughter at birth and cannot bring herself to believe that her soul is condemned to wander in limbo.

There is a place in the mountains where her child can be brought back to life, for a breath, to be baptized.

With the help of Lynx, Agata embarks on a journey to find the miracle.

Under the rule of Margaret Thatcher, the story of Buddy a little boy and his family in the Belfast of the late 1960s.

Reader Question: Are there any script rules that really shouldn’t be broken? | by Scott Myers | Feb,

Around an arms deal between Algeria and Germany, spies, government officials, lobbyists and activists intrigue and tear each other apart… Frédéric Jardin (“Braquo”, “Engrenages”) orchestrates a breathless thriller, knotted in the shadow of law and morality.

A true icon of British history, Florence Nightingale (1820-1910) laid the foundations of modern nursing. A beautiful tribute to a pioneer whose integrity, selflessness and zeal are to be admired.

Olivier Assayas subtly portrays the chronicle of a small group of friends confronted with the loss of youth and the mourning of one of their own. With Jeanne Balibar, Mathieu Amalric, Virginie Ledoyen, François Cluzet, Mia Hansen-Love, Nathalie Richard and Éric Elmosnino.

5. BEST MOVIES AS FROM FEBRUARY 16TH  ON ARTE

Exterminate all the brutes, by Raoul Peck.

Best movies as from February 16th on Netflix

Pieces of her, Charlotte Stoudt, adapted from the eponymous novel by  Karin Slaughter, on March 4th.

Best movies as from February 16th on Prime Video

I want you back, by Jason Orley, now.

In the heart of the 1960s, a young French spy, Francis Mareuil, meets Lyudmila, a Russian pianist, and falls in love with her.

Best movies as from February 16th on Canal+

Best movies as from February 16th on Apple TV

The Sky is Everywhere, by Josephine Decker, written by Jandy Nelson, inspired by the eponymous novel. On February 11th.

The Last Days of Ptolemy Grey, by Ramin Bahrani,  with  Samuel L. Jackson, as from March 11th.

Best movies as from February 16th on Disney Plus

How I met your father, series by Isaac Aptaker & Elizabeth Berger, on March 9th

Best movies as from February 16th on Starzplay