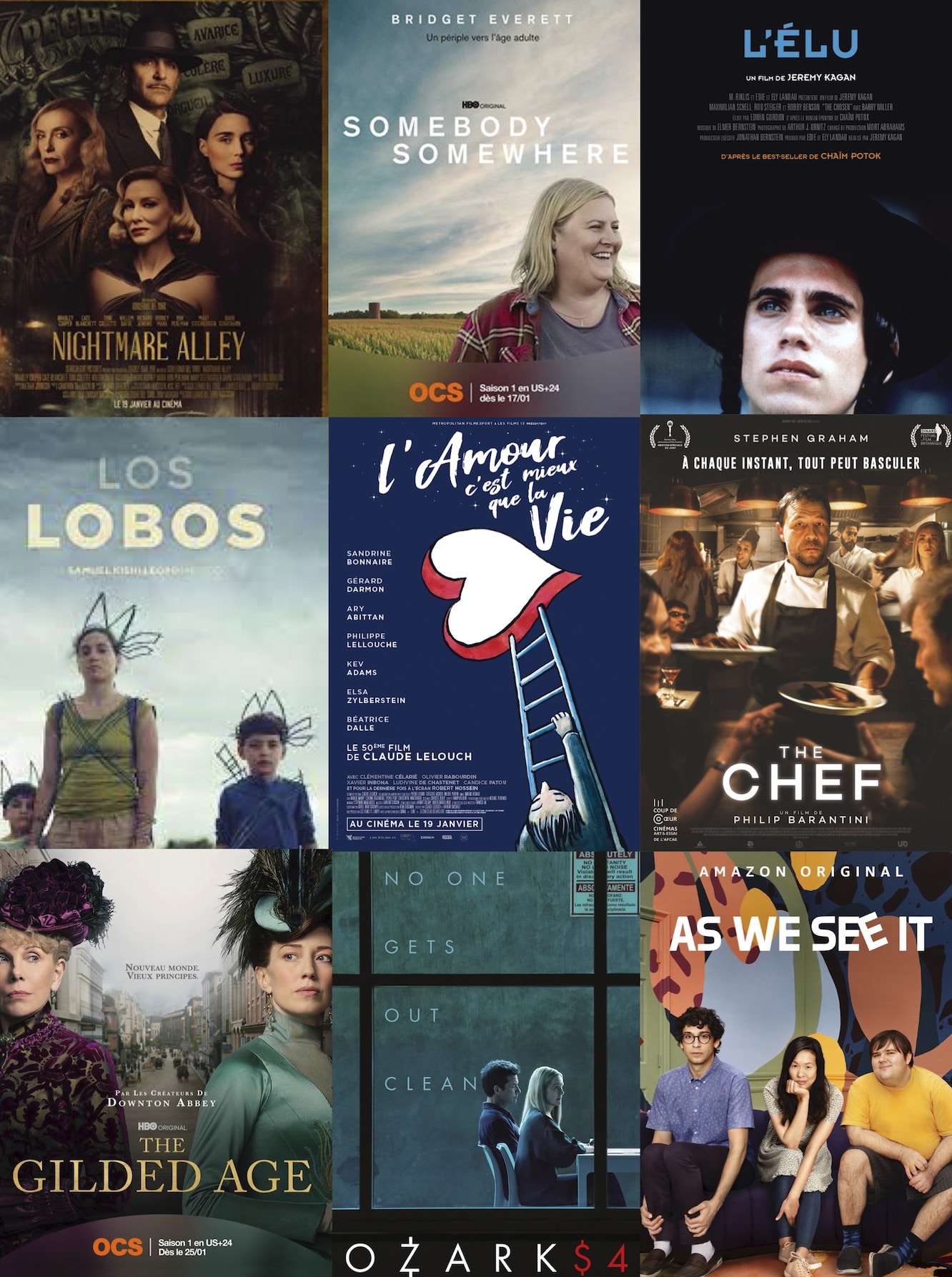 Your new films & series in theaters & on your platforms

What are the best movies as from January 19th ?

Answer in this article 😉

MEP celebrates Nigerian popular cinema through an exceptional program of “Nollywood” films every Thursday evening from January 13 to February 17, 2022. All the information on the Nollywood cycle.

FESTIVAL AS FROM JANUARY 19

Aimed at everyone, the program includes films for all audiences and young people with 4 types of programs and 5 unique themes in 2022.

The Center for Art and Culture and the FSJU are organizing the 2nd French Jewish Film Festival from January 18 to February 2, 2022.

Now called “Dia(s)porama”, the Festival offers a look at international Jewish cinema, through the online programming of 12 films and documentaries with a Jewish theme, never before seen in France, from all over the world: Mexico, Czech Republic, Switzerland, England, Denmark, Germany, USA, France, Israel.

Podcast about the program 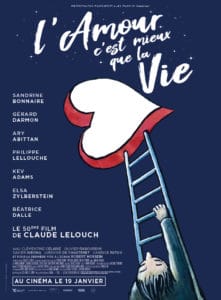 The three A’s: LOVE, FRIENDSHIP and MONEY are the three main concerns of humanity.

To talk about them as simply as possible, Gérard, Ary and Philippe met 20 years ago, when they got out of prison, and immediately asked themselves the real question: What if honesty was the best trick? Today, they are inseparable and scrupulously virtuous…

But Gérard learns that he is suffering from an incurable disease. Knowing that he is doomed, Ary and Philippe want to offer him his last love story… because Gérard has always said that love is better than life.

I went to the UGC Normandie to see the premiere of Claude Lelouch’s 50th film, in a packed room, full of fans and shivering with impatience for the arrival of the director.

Claude Lelouch arrived to thunderous applause and a standing ovation was rightly given to him.

Indeed, to watch a film of Claude Lelouch is to contemplate a whole part of the history of French cinema. He also paid tribute to the actors and actresses with whom he has filmed (more than a thousand, he told us).

These last 50 years, Claude Lelouch has offered us a firework of beautiful stories and an uneven filmography.

Today, at the age of 84, Claude Lelouch has not lost any of his energy.

In “L’amour c’est mieux que la vie”, his 50th film, the director mixes stories and many references to his past films (Lino Ventura in “La Belle Année“,  and Nicole Garcia & Robert Hossein in “Les uns et les autres”) are distilled throughout the story he tells us.

And in “La Belle Histoire” (released in 1992) where Jesus, played by Gérard Lanvin, and Béatrice Dalle, appeared for the first time in one of his films.

“L’amour c’est mieux que la vie” begins with an encounter between Jesus and policemen. Béatrice Dalle plays the devil, and Xavier Inbona, Jesus, because without good and evil, there is no love story.

Claude Lelouch also films his time, the demonstrations in the streets of Paris, the yellow vests, all during the Covid, the actresses and actors sometimes wear masks.

A tribute to actors & actresses

A tribute is paid to Robert Hossein, his last screen appearance before his death, in a moving exchange with Gérard Darmon, his son in the film.

But it is especially to Gérard Darmon that it makes the beautiful part. Filmed from every angle, the actor is extraordinary.

He is of course highlighted by Sandrine Bonnaire, in a scenario that recalls “The Gift” directed by Michel Lang with Pierre Mondy. Claudia Cardinale and Clio Goldsmith.

The story is as follows: While Gerard (Gerard Darmon) learns that he is about to die, his friends, Ary (Ary Abbitan) and Philippe (Lellouche)

decide to offer him a false last love story by contacting a network of prostitutes.

Sandrine (Sandrine Bonnaire), head of a network of escort girls (presented as Lino Ventura’s daughter in the film), decides to play the role of the gift to Gerard, because the other women are much too young and would not be credible…

Of course the two fall in love but…

In this first part of a triptych announced at the beginning of the screening, we wander through Paris where fortunately there is still jazz, love and miracles…

The film would be an enchantment if it were not for the place of women. What are they good for?

Claude Lelouch has told hundreds of love stories. And for him, as for, alas, very often the men of his generation, there is a place for men and a place for women.

Thus, men have all the rights (to brag about being unfaithful and to have it accepted) and women must either serve them or put up with their infidelities. For Claude Lelouch, love makes all this bearable.

His vision of women in the past is the only drawback of this film “Love is better than life” that I loved.

TO WATCH IN YOUR MOVIE THEATERS

Two young Jewish New Yorkers become friends in the 1940s. Their differences in character and values fascinate them before threatening to turn them into adversaries.

In a gourmet restaurant in London, with the kitchen just minutes away from firing, the entire staff is on fire. But problems are piling up around star chef Andy Jones and his brigade.

The three A’s: LOVE, FRIENDSHIP and MONEY are the three main concerns of humanity. To talk about them as simply as possible, Gérard, Ary and Philippe met 20 years ago, after their release from prison, and immediately asked themselves the real question: What if honesty was the best trick? Today, they are inseparable and scrupulously virtuous… But Gérard learns that he is suffering from an incurable disease. Knowing that he is doomed, Ary and Philippe want to offer him his last love story… because Gérard has always said that love is better than life.

1942, in occupied France, Gilles is arrested and deported to a camp in Germany. Just before being shot, he escapes death by swearing to the soldiers that he is not Jewish but Persian. This lie saves him momentarily because one of the camp leaders wants to learn Farsi for his post-war projects. At the risk of being caught, Gilles invents a language every night, in order to teach it to the SS captain the next day. The special relationship that develops between the two men soon arouses the jealousy and suspicions of the others…

Max, 8 and Leo, 5 leave Mexico for the United States with their mother Lucia in search of a better life. They spend their days in a small apartment waiting for their mother to return from her hard work. Lucia promises to take them to Disneyland, a dream they cling to during their long days of loneliness.

Under the rule of Margaret Thatcher, the story of Buddy a little boy and his family in the Belfast of the late 1960s

How to Write a Marketable Screenplay  by Scott Myers 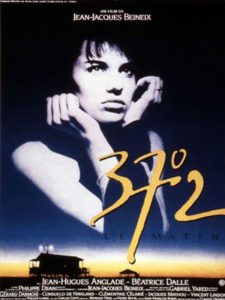 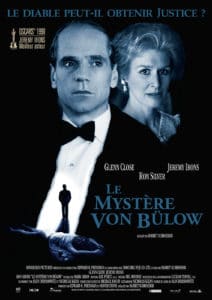 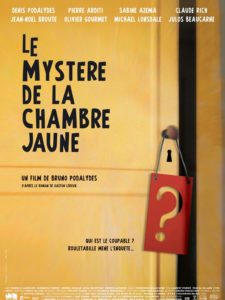 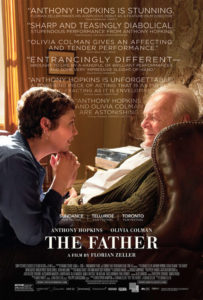 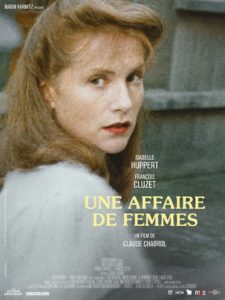 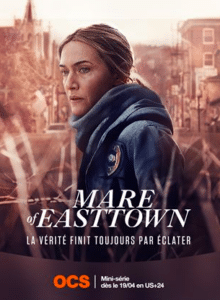 Canal Plus : Mare of Easttown

Canal Plus : The Father

5. BEST MOVIES AS FROM JANUARY ON ARTE 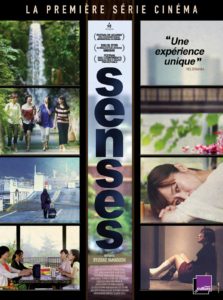 In California, a child killer eludes the police. The local mob goes after him… By Joseph Losey, the American remake of Fritz Lang’s masterpiece, “M le maudit”. Presented in a restored version.

Los Angeles, early 1950s. An elusive child killer has been plaguing the city for several months. As the list of his little victims grows, a wave of panic begins to sweep through the population, which begins to suspect every man of being the author of these heinous crimes. On the teeth, the police multiplies as for her the identity controls in vain in the bars and other places of pleasure. More and more worried about their business, which the increased surveillance dangerously compromises, the local underworld decides to arrest the criminal themselves…

Best movies as from January 19 on Netflix

Munich The edge of war, adapted from Robert Harris’s novel, on January 21, by Christian Schwochow.

The Woman in the House Across the Street from the Girl in the Window, on January 28th, created by  Rachel Ramras, Hugh Davidson & Larry Dorf

Best movies as from January 19 on Prime Video

Inspired by the Israeli series On The Spectrum, created by Dana Idisis and Yuval Shafferman and Grand Prix at Séries Mania in 2018, As We See It tells the daily life of roommates in their twenties, Jack, Harrison and Violet, affected by autism, between difficulty in keeping a job, making friends a job, finding love…

I want you back, by Jason Orley, on February 11th

Best movies as from January 19 on Canal+

The Extraordinary life of Louis Wain, by Will Sharpe, with Benedict Cumberbatch, Claire Foy.

The quest for oneself in a remote Kansas town and at the dawn of midlife revisited by stand-up comedian Bridget Everett.

The Father, Florian Zeller, as from January 26.

Best movies as from January 19 on Apple TV

The Tragedy of Lady MacBeth, by Joel Coen,.

Suspicion, by Rob Williams, based on the Israeli thriller series False Flag. The series will star Uma Thurman. On February 4.

Best movies as from January 19 on Disney Plus