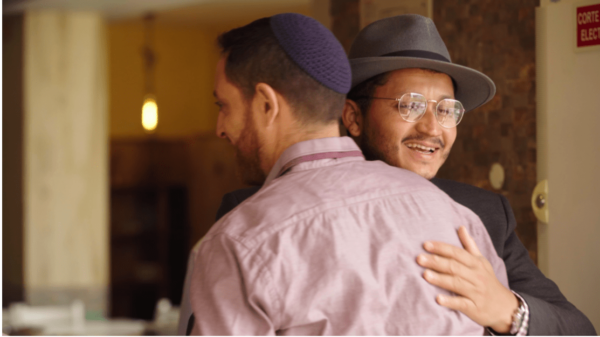 The Rabbi of Marranos

Directed by Rudy Saada and Anthony Lesme, The Rabbi of the Marranos was screened as part of the Festival of Jewish Cultures, which takes place both online and in person from June 14 to 28.

THE RABBI OF THE MARRANOS

The origin of the Marranos

From the 15th century onwards, the Marranos were Jews from the Iberian Peninsula and its colonies (Spain, Portugal, Latin America) who were forcibly converted to Catholicism and continued to practice their religion in secret.

The word “Marrano” or “Marranism” has lost its pejorative connotations and is now used in historiography. They were also called anoussim (a generic Hebrew term for Jews converted by force and not specific to this period, meaning forced).

Conversos, Marrano or not, were considered “new Christians”, as were their descendants up to the fourth generation. A more “neutral” name than marranos is crypto-Jews, which comes from the Greek kryptos – κρυπτός meaning “hidden”.

Samuel Schwarz, a Jew from Poland, fell in love with Portugal and settled as an engineer in a tungsten mine in Vilar Formoso and a tin mine in Belmonte. There, in 1917, he discovered the secret community of Marranos in this region of northern Portugal. The original text, in Portuguese, was published in 1925 under the title Os cristãos-novos em Portugal no Século XX (The New Christians in 20th Century Portugal).

Rudy Saada and Anthony Lesme met Rabbi Franko while they were about to finish another shoot.

Originally from Manaus, Brazil, and therefore speaking Portuguese, he came to replace a retired rabbi to take care of the community of Belmonte.

Together, they will travel through Portugal and this adventure will take them to Israel where descendants of Marranos also live.

Some historians estimate that there are 30% of Marrano descendants in Portugal today.

Back to the roots

In The Rabbi of the Marranos, the journalists Ruby Saada and Anthony Lesme with the Rabbi Franko, succeeded in filming moving testimonies of the descendants of Marranos. Some of them speak of their choice to convert to Judaism in order to affirm their Jewish identity.

Their conversion is often explained by an irrepressible need to officially reconnect with their roots, to affirm their Jewishness. And if this quest is above all spiritual, it is also emotional.

In spite of their will and their past persecutions, these people often find it difficult to be accepted within the orthodox or traditional synagogues. The result is often a return to Israel, where they stay because living their Judaism is easier. And they are not considered on the fringe of either religion.

The Portuguese communities are slowly disappearing. Rabbi Franko has made it his mission to keep the communities in Portugal alive, as best he can, and although he is no longer the rabbi of Belmonte, he is trying to create a community in Braga, in the north of Portugal.

It is said that documentaries are often written after the shooting. This was the case for The Rabbi of the Marranos, an intense film, shot in a very short time but. Through its writing and very good editing, it raises many questions about our relationship to religion.

Rudy Saada and Anthony Lesme liked the meetings with these people in search of identity, very touching and sincere in their approach. They developed a very strong bond with Rabbi Franko, which they continue to cultivate.

The Rabbi of the Marranos is a precious testimony to the modern history of the Jews and the practice of Judaism.

The premiere of their next film “Guardians of the Temple, Krakow” (here is the trailer) should take place in late September-early October.

The entire program of the Festival of Jewish Cultures.