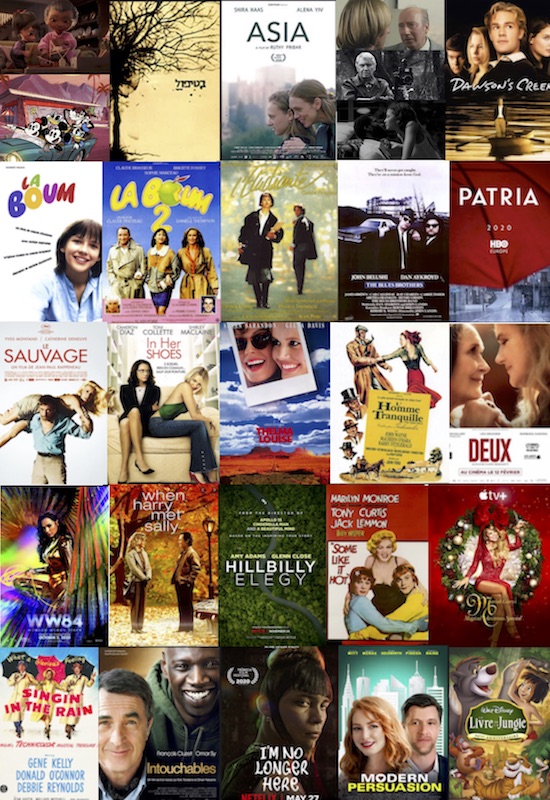 This week, I have chosen ten feel-good movies to watch at home, staying safe.

We heard a very good news: the reopening of movie theaters and theaters.

News of the week

Here are four movies about the past, new series, advice from film professionals and the best of your TV programs. 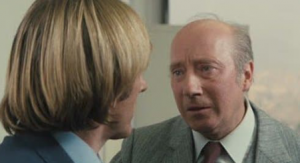 Michel Robin passed away aged 90 because of Covid 19. Associate member of la Comédie Française, and great French actor, he played in many feel-good movies:

FROM OUR FAMILY TO YOURS, a short movie for Christmas

The music of Richard Sanderson, and that of Vladimir Cosma have left their mark on an entire generation of which I am a part. I saw this film again with my daughter recently and laughed a lot. Denise Grey, Vincent Lindon in L’Étudiante, and of course Sophie Marceau reminded me of good times. Jacques Chancel makes an appearance. The little sister and grandmother characters are hilarious.

2. Singin in the rain (on Amazon Prime)

The musical masterpiece by Stanley Donen and Gene Kelly is the must-have of feel good movies.  The performances of Debbie Reynolds, Gene Kelly, Cyd Charisse, Donad O’Connor are extraordinary and still captivate us. Moreover Sophie Marceau plays a part in La Boum 2 when Brigitte Fossey watches her daughter dance.

Billy Wilder‘s comedy is a feel-good film: the comedy of Jack Lemmon, the charm of Tony Curtis and the voice of Marilyn Monroe make this film about jazz, love and play, one of the best ever to feel better. And what an ending!

This movie by Toledano and Nakache is a true comedy and the revelation in this movie is obviously Omar Sy although François Cluzet is perfect in his part, as usual. I still remember the part when he dances on Earth Wind & Fire music, a great moment!

Directed by John Ford in 1952, this film is now a classic. The story of the return of this boxer, Sean – played by John Wayne – who unintentionally killed his opponent, back in his village in Ireland and his encounter with the beautiful and rebel Mary,  played by Maureen O’Hara, left a lasting impression on me. I had loved this film, which was both funny and romantic at the same time. I often see it again with pleasure.

Adapted from Rudyard Kipling ‘s novel, who hasn’t seen this cartoon with this great jazz music and the funny character of Baloo?

I have always like this movie which reminds me of the forest of Africa and I really loved this story of friendship and love between a child and an animal. It is one of my favorite Disney cartoon.

Directed by Rob Reiner,  I know the dialogues of this romance by heart. I don’t even know how many times I have seen it. Each time I laugh at the same moments. And in this movie, I love to watch New York and listen to the score with great  jazz tunes. Follow my advice and watch it, you won’t regret it !

With Billy Cristal and Meg Ryan.

This one is a masterpiece. Why ? Not because of the plot but because of the laughters and the music. Directed by John Landis who did Thriller first videoclip of all times, the actors are often both actors and musician. Check this out : Dan Aykroyd, John Belushi, John Goodman, Carrie Fisher; Steve Cropper and : Cab Calloway, Aretha Franklin, Ray Charles, James Brown. Every time I watch this movie, I feel better after.

One of the best French comedies ever directed by Jean-Paul Rappeneau released in 1975, this movie is the ideal film to watch now. Yves Montand and Catherine Deneuve are fabulous in this comedy set on a heavenly island, everyone’s dream at the moment. A real cure for gloom!

If you have a sister or not, you must absolutely see this film. Rivalries, friendships, loves, family secrets, all played by Cameron Diaz, Toni Collette (whom I love!) and Shirley MacLaine. Once again, a lot of love, tenderness, very strong moments for this story full of tenderness. Directed by Curtis Hanson, this comedy is adapted from Jennifer Weiner’s novel by screenwriter Susanna Grant.

If you have seen this film released in 1990, it has inevitably moved you and left a mark on you.

The screenwriter Callie Khouri fought both for its production and for her vision of two scenes, the strongest of the film, the attempted rape and the end, contrary to so-called Hollywood films. She won an Oscar in 1991 for Best Original Screenplay.

Harvey Keitel in the role of the policeman has for once a role of « nice” guy.  In fact, he is the only man to understand Thelma and Louise’ actions.

You will obviously remember the first appearance of Brad Pitt, a true revelation of Thelma and Louise, the music of Hans Zimmer, and that turquoise blue car, the incredible 1966 Ford Thunderbird, which was a real challenge during the shooting because there are very few of them left in circulation in the United States.

And of course we will always remember the complicity of Geena Davis and Susan Sarandon, two very committed actresses in Hollywood today. Geena Davis produced the documentary on “Can Women Count in Hollywood”, currently available on Canal+.

This film leaves you speechless. It provides a mixture of sadness and satisfaction linked to the tragic, rebellious and heroic journey of Thelma and Louise. The two women are inseparable. Together they form a shield against a patriarchal society where women’s voices are not heard.

A must see movie!

This film is the antithesis of a feel-good movie. The movies that bother us the most are sometimes the ones that do us the most good. Hillbilly Elegy will certainly win an Oscar this year, or at least one of its interpreters.

Adapted from memoirs written by J.D. Vance, a famous American businessman, the film tells the story of this man as a child.

He lived in the Appalachian Mountains, that huge region of the United States that experienced both a coal and metal crisis. This film shows the hardships of life for people in the Midwest. Hillbilly is a term like “red-neck”. It is a sociological stereotype applied to the people of this region. The elegy is a lyrical and melancholic poem.

The childhood of JD Vance and his sister is marked by the poverty, madness and instability of his addicted mother played by Amy Adams, immense in this role. Gabriel Basso plays the hero, the true revelation of this film.

As a Yale law student, JD Vance had to return to the city of his childhood because his mother almost died of a heroin overdose. Built by flash-backs, the director shows us the raw reality of this family, a daily life à la Zola and some scenes are very harsh.

Glenn Close plays the grandmother of J.D. Ron Howard (Apollo 13, Rush, Cocoon, Splash...) gave him one of the most beautiful roles of his career.

Poignant and strangely beautiful, Hillbilly Elegy a film to see. The actors are simply bluffing.

Ron Howard knew how to transcribe all the harshness of the life of this part of the population simply abandoned by the authorities. But above all it is a film about the family and all its shortcomings, which Ron Howard achieves best.

Woman movie in the Arabic world by two women directors

Forum des Images : masterclass and a meeting every Tuesday at 8.PM.

How to Write a Good Book: Four things you can do right now by Shaunta Grimes 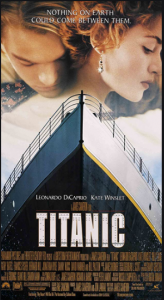 Arte : The Firm then  a documentary about  Tom Cruise

Paramount : Man on The Moon

Be Tipul (In Therapy), the Israeli series by Hagai Levi, finally adapted in France!

It will be broadcast in its entirety on ARTE.TV at the end of January 2021 and on ARTE on Thursdays at 8:55 pm from the beginning of February, announces the channel, “En Thérapie”.

A star is born by William A. Wellman

We are the Champions, on weird contests around the world

The Call, as from November 27th.

By Sidney Sibilia, with Elio Germano…..As from December 9th

Live by Night, de Ben Affleck, as from November 18th

Motherland for Salem, by  Eliot Laurence

Nurses, a Canadian series about five years, by Adam Pettle

The Traitor by Marco Bellochio : to watch as from December 1st ! 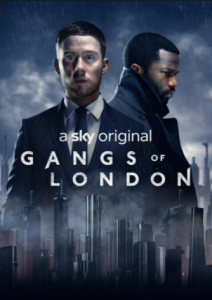 Seduced: Inside the NXIVM cult -By Cecilia Peck .  India Oxenberg ‘s story within NXIVM cult which obliged its member to be sexual slaves

Movies and series to watch on Apple TV

For All Mankind, season 2 in next February