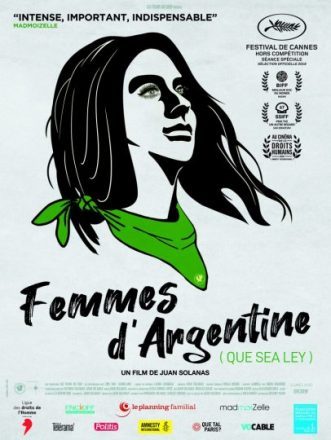 Que Sea Ley is a documentary directed by Juan Solanas. It tackles the ban on abortion in this country that is believed to be so modern. Moving testimonies punctuate Que Sea Ley a film that pays tribute to all those women deprived of their freedom. 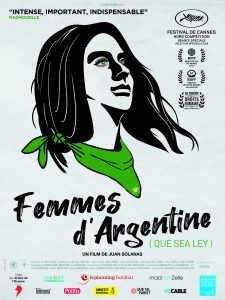 In Argentina, where abortion is prohibited, one woman dies every week as a result of a clandestine abortion. For eight weeks, the bill passed in the House of Parliament was discussed in the Senate. In the streets, tens of thousands of activists demonstrated in defense of this right.

Argentine feminists and their extraordinary mobilization raised hopes for a law that legalizes abortion.

A change in history

In 2018, a women’s collective presented a bill for the legalization of abortion for the seventh time. The economic context is particularly difficult. 36% of the population lives below the poverty line and 48% are minors women.

Juan Solanas filmed the demonstrations, the debates in the Senate, and collected numerous testimonies from women who have had clandestine abortions.

Many women are speaking for the first time. Juan Solanas traveled 4000 km across the country to collect their testimonies. Between their speaking, the speeches of senators and – even harder to admit – of women senators opposed to abortion, are very difficult to hear.

In Que sea Ley, the filmmaker confronts us with barbaric facts: raped girls are forced to terminate their pregnancies, young women and mothers who come to the hospital are turned over to the police. One woman was sentenced to seven years in prison for having a miscarriage in the hospital. One family lost both daughters to complications from clandestine abortions and were left abandoned in the hospital.

The Catholic religion, with its strong historical social weight in all of Latin America, the hypocrisy of the medical lobby – which charges a high price for illegal abortions – and the increasing poverty of the Argentinean population are at stake. Women do not have the means to get treatment or to go abroad to have an abortion.

We see them demonstrating dressed in the clothes of The Handmaid’s Tale, a novel by Margaret Atwood. In a dystopia, the writer describes a society where women are sexual slaves for reproduction.

More than two million people have demonstrated in favor of abortion…

And in Uruguay, where abortion has been legalized, the maternal mortality rate has fallen to zero. In Argentina, it is 20%, compared to 11% in the whole world.

The younger generation is more mobilized than ever and Argentinean women continue to demonstrate regularly for this right that is denied them.

Everywhere in the world the right to abortion is being challenged: in Italy, Spain, Poland, Brazil, the United States of America, where President Donald Trump has tried everything to make abortion illegal.

Below is his speech:

The collection of these testimonies is essential.  Juan Solanas captured a society in full transformation. A woman told the director: “This century will be the century of women’s rights”. Unfortunately, there is still a long way to go before we get there.

Access to education and contraception are two key factors in the emancipation of the law. Violence against women takes many forms. In addition to the ban on abortion, feminicide still occur all over the world. And in Argentina, a woman dies from beatings every twenty-six hours.

“In my view, the notion of choice should not have emerged from the right to privacy or the rights of doctors, but from the right of women to control their destiny, to be able to make choices without a “Big Brother State” telling them what to do and what not to do,” Ruth Bader Ginsburg explained to a fellow jurist.

In France, the number of abortions has increased considerably. Thus “nearly one abortion out of five is performed between the 10th and 12th week of pregnancy, the maximum legal delay. The delegation for women’s rights at the Assembly recently recommended extending this period from 12 to 14 weeks, a measure that will be the subject of a proposal (source : “Le Monde”).

Many films have dealt with the subject of abortion: Une Affaire de Femmes de Claude Chabrol, Juno de Jason Reitman, Vera Drake de Mike Leigh, are among the movies I recommend rather radical on the subject.

A demonstration is organized in support of women, including Argentinean women, who are mobilizing for the eighth years.

Que Sea Ley  comes out in movie theaters Wednesday September 30th. A preview is forecast at The Balzac theater in Paris on the evening of September 28th.