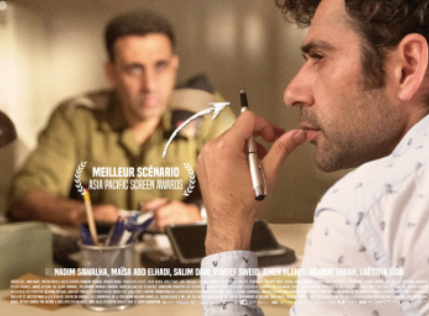 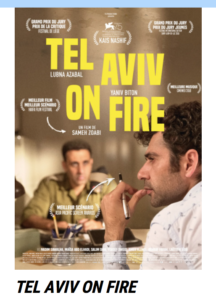 This comedy is about the Israelo-Palestinian conflict, and happens during the shooting of a soap-opera.

Tel Aviv on fire is a soap opera shot in Ramallah, adored by its spectator both Palestinian and Israeli people. Salam works on the film set for his uncle. He has a small part, he makes coffee, helps the actors with the Hebrew pronunciation.

“With this title, you did not expect it would be a Zionist series ? ” says one of the actors.  One day, Salam gets arrested at the checkpoint with the script. When the Israeli officer asks him if he is the screenwriter, he answers yes.

Will follow an imbroglio between the demands of the officer on the script to become more Israelian friendly and his growing commitment for the writing.

This subtil comedy, directed by Sameh Zoabi, tackles not only the Israelo-Palestinian conflict – Salam uncle, called Bassam lived the Six Day War- but also the challenging and demanding work to become a true screenwriter. To succeed, it must be his first priority.

It’s all about writing

Indeed, Stephen King, in his book, “On writing – A memoir on the craft” advises any candidate to become a writer to write every day at least two hours no matter what. That what happens to Salam, he becomes more and more involved in the writing and finally finds in the story a reason to live.

This movie is dialogue between two people, the script has been written by the Palestinian Director Sameh Zoabi and the Israeli screenwriter, Dan Kleinman.

All the actors are brillant. I have a preference for the hero, Salam, played by Kais Nashef. The Israeli is played by Yaniv Biton. The lead actress is played by Lubna Azaval. You will also see the French actress, who played in Fauda series, Laëtitia Eïdo.

Humous is a full part of it ! The recipe below is from the press file. I’ve not done it yet ! But I wish you a good movie and bon appétit ! 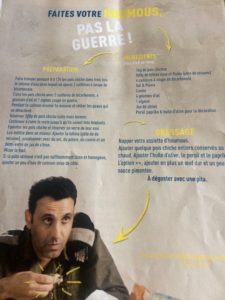