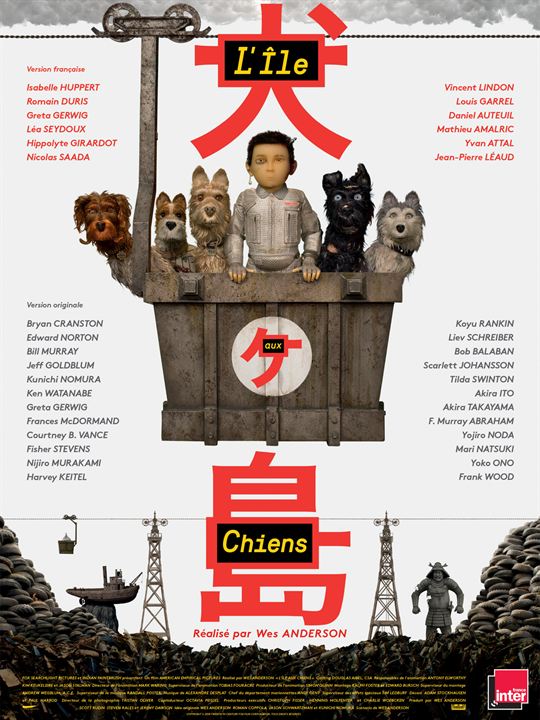 The Isle of dogs by Wes Anderson

The Isle of Dogs. Wes Anderson is one of my favorite directors. Not only he succeeds in making movies but he’s also great when it comes to an art which is more difficult, the animation picture.

The isle of dogs

Wes Anderson masters the art of telling stories (all his films are divided in chapters as books) and showing great adventures, which is the essence of cinema.

« The Isle of dogs » begins with a flash-back on relationships between dogs and human, in past where they have been exiled.
Then, we are projected in a distant future. The mayor of the city of Megasaki, Kobayai, decides to exile all the dogs on a trash island because of a so-called contagious dog flue.

Six months later, his adoptive son, Atari, decides to find his dog, Spots, the very first one sent away on the island as an example.

He crashes on purpose on the island and  he’s rescued by five dogs, Rex, King, Duke, Boss and Chief.

Wes Anderson has created a complete universe around the wandering, the feeling of rejection, touching us personally («what is your favorite meal? », they ask each other when they are starving).
Mankind is at the core of this film. The way we treat animals reveals who we truly are.

The director condemns the abuse of animals and the violence of totalitarian regimes. He honors the Japanese culture through the music and all its culture (language, haïku, Kabuki theater, Sumo wrestling).

Alexandre Desplat, regular composer of his movies, has reconstituted the Japanese culture by -among other things- the use of taiko.

Not only Wes Anderson tackles the bonds between the dog and human, but the eternal challenge of creating emotional relationships, whether they are between dogs or a father and a son.

The use of different languages shows his will in stressing the intricacy of these connections. Humans speak Japanese, dogs English…To understand each other, Atari and his dog needs  translation headphones.

The individual freedom of the man and the animal are also essential. Chief, a stray dog, doesn’t want any master unlike his congeners.

Young people like Tracy Walker, a young American student, rebels against the current system which forbid anyone to have a dog.

Wes Anderson shows that foreigners can help in destroying the regime set up by Kobayashi.

Nutmeg, the only one dog female on trash island doesn’t want to give birth to babies because it would be too dangerous.

Does Wes Anderson ask us : has our planet became a trash ?

This film is beautiful, touching, funny. Shot in stop-motion, it took two years, 670 people, a thousand puppets and 240 film sets created by Adam Stockhausen and Paul Harrod to create this movie.
It is a masterpiece thanks to the script, written by Wes Anderson with Jason Schwartzman and Kunichi Nomura, the real richness in the characters, the music and the film sets.