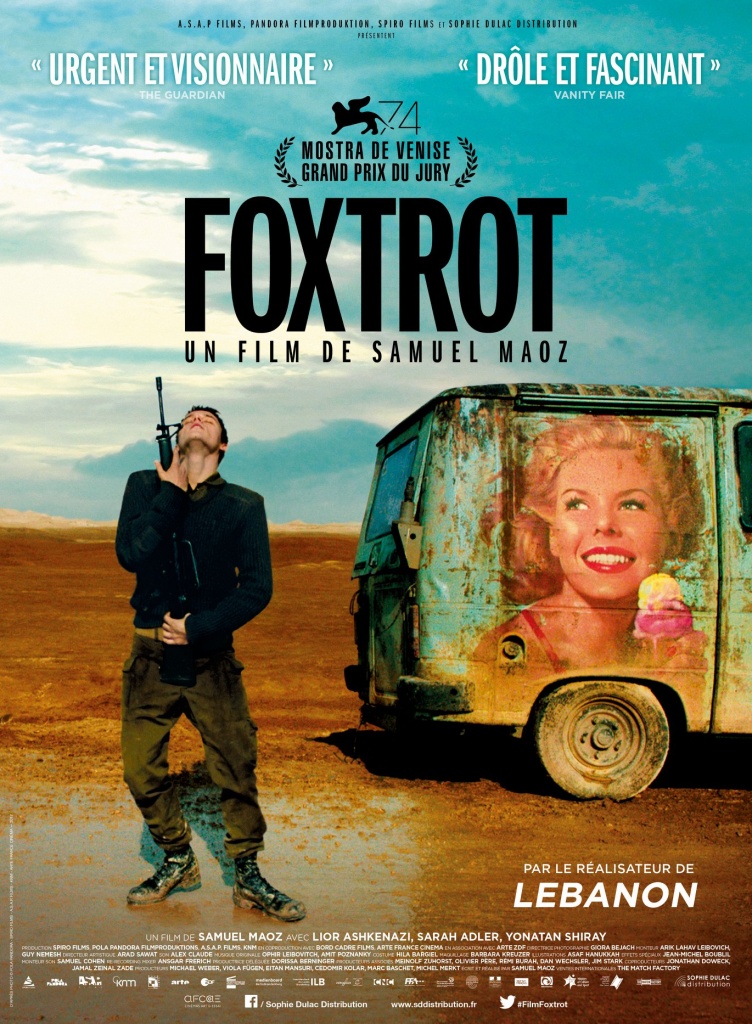 Foxtrot….From the very start , the director knocks out the spectator.

The purpose of dying

In Israel, three young soldiers announce to the parents the death of their son at the army.

The film is divided in three moments and has the power to mix three artistic genres, drama, comedy and animation.

Samuel Maoz show the powerlessness of the unofficial speeches dealing with death. And the actors convey their grief. Then, the parents hurt themselves physically to face the awareness of their dead son.

The characters filmed from above shows us how much their world has changed dramatically. The earth turns the other way around.

And the father, the mother, the son, the army are four isolated characters.

The son, soldier is assigned in a place where the camel crosses the border from the Territories more often than the Palestinians. He lives with his comrades in a caravan settled on a moving ground, communicates with old technological means which reminds uf of 1941  by Steven Spielberg.

They hardly connect to a radio without sizzling and their only distraction is music , jazz or hard-rock listened very loud in the headphones of one of their companion. The woman drawn on the caravan strenghens the feeling of a place where the time has stopped.
The soldiers are cut off from the world. They remind us of the soldiers found after World War II who didn’t know that the war has ended. The canns food roll, the measured time is shrinking one second each day and the caravan is slowly sinking.

One blunder occurs committed by Israeli soldiers and is hidden by a bulldozer which belongs to the army.This scene started the controversy.

The director shows us that same tragedies trigger the same guilt at each generation. Foxtrot is a square dance which always comes at his starting point. The political situation is bound to repeat itself unless the system changes…