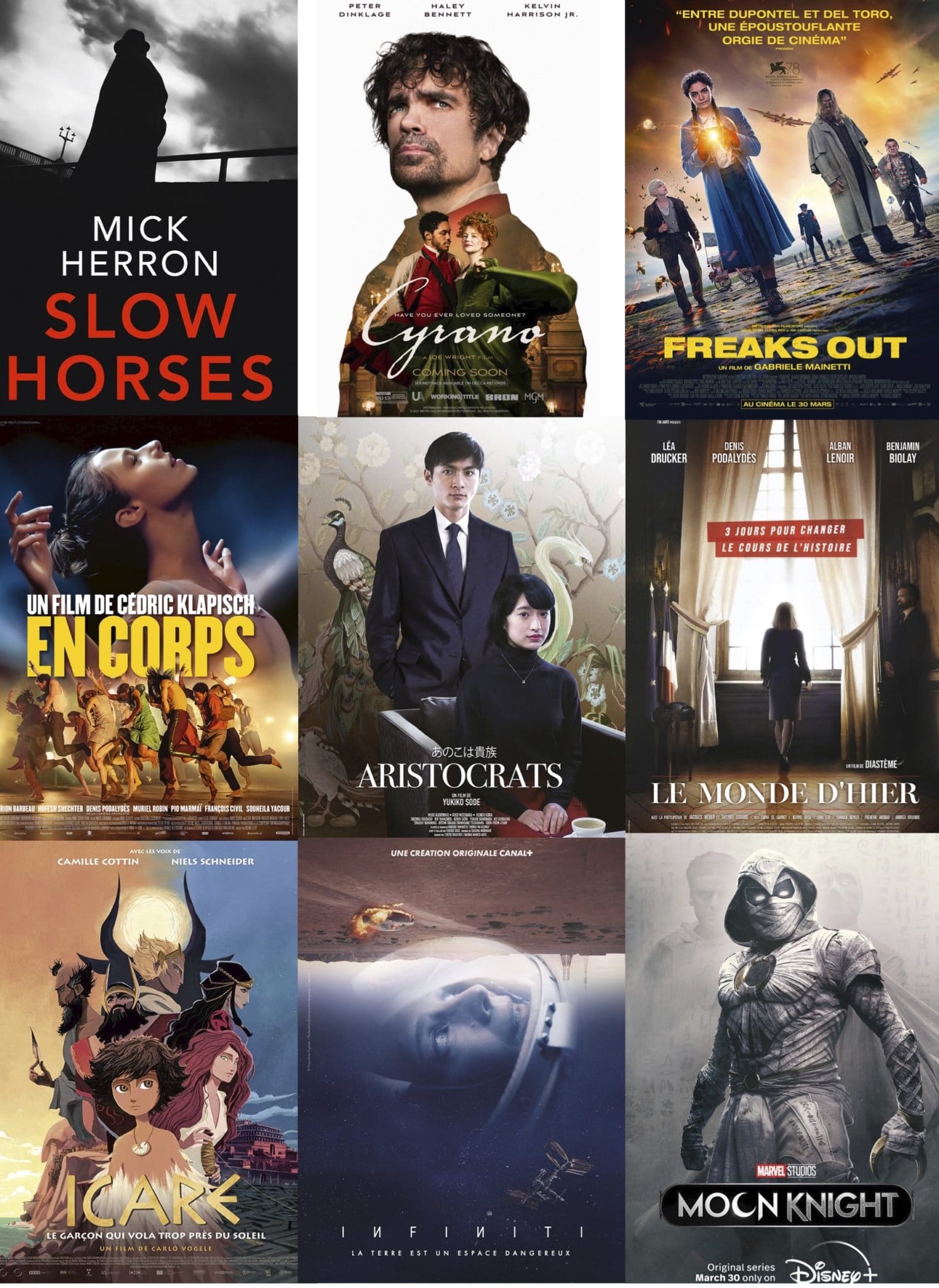 movies and series as from March 30th

What to watch as from March 30th?

News as from March 30th:

In bold police, my predictions, in red reality:

Will Smith at the Oscars

The Power of the Dog, by  Jane Campion

For over 40 years, HIFF has presented the best in international cinema to Hawai‘i cineastes. Join HIFF Selects and have the best international and independent films delivered directly to you for a true film festival experience year-round.

And The Offer, Michael Tolkin, is based on Oscar-winning producer Albert S. Ruddy’s extraordinary, never-revealed experiences of making “The Godfather.”

These films have been nominated for several award categories over the years but haven’t always received the same mainstream recognition as many of the other iconic Oscar winning productions. 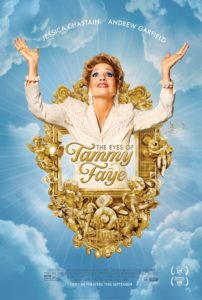 In the 1970s, Tammy Faye and her husband Jim Bakker were a huge success. Their televangelist program The PTL Club, launched in 1974, was a triumph until 1989, when her husband was accused of a sex scandal

Jessica Chastain just won an Oscar for the Best Actress  for her role in this film available on Disney Plus.

Shouldn’t Oscar-winning films be required to be released in theaters?

This film tells a part of the history of the United States that we Europeans know little, that of the evangelists and the most famous of them, Tammy Faye, played by Jessica Chastain and Jim Bakker, played by Andrew Garfield (seen recently in the excellent Tik, Tik Boom available on Netflix).

Adapted from the documentary The Eyes of Tammy Faye released in 2000 by Fenton Bailey and Randy Barbato.

The film recalls Tammy’s childhood and her meeting with Jim, with whom she falls in love.

Of course, in the beginning, she backs him and does everything to make her husband, already a crook, famous. Both of them advocate a modern, joyful faith, but above all what attracted Jim is the lure of gain.

Then, she reveals herself, starts to sing and becomes as famous as her husband and more loved by the public who perhaps feels more her sincerity.

Modern and free, she defends the rights of homosexuals and fights against the televangelist churches and supports them when AIDS begins. Even today, she is close to the LGBTQ community.

Masterful, Jessica Chastain is unrecognizable, not because she plays very well, (she always does) but because she is physically transformed. Like Gary Oldman as Churchill, she spent several hours every day in makeup to look like Tammy.

Powerful, a touching, independent woman, and the actress makes us love her character, who loved people as much as prayers.

The only regret is to have seen it on a small screen.

Currently on Disney Plus. 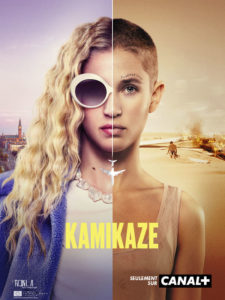 Until then rich and famous, Julie sees her destiny change when her brother and parents die in a plane crash on her 18th birthday.

Inspired by the novel Muleum by Norwegian writer Erlend Loe, Kamikaze, a Danish series, navigates between her life before the death, her life after the accident and all the events that led her to this moment.

It speaks to us of transmission, passion, love and memory.

On her phone, the last words received by text message from her father are “The plane is going to crash. We love you. Do whatever you want. Dad”.

Julie (Marie Reuther), a famous fashion influencer, is the beloved daughter of the family, her father’s favorite, her mother’s and brother’s accomplice.

The day her entire family dies in a plane crash in Rwanda, Julie finds herself alone in her huge, luxurious house with Krzysztof (Aleksandr Kuznetsov), a Polish worker who is busy finishing laying blue tiles in an indoor pool.

Despite friends and the help of a shrink, her despair never leaves her. Julie lies to others, lies to herself, caught in a grief like a trap.

A journey of despair

Julie seeks to die…in a thousand ways. What if death did not want her?

From Korea to Mexico, Julie tries all kinds of adventures, the most dangerous ones, learns to fly, and survives a crash in the desert… There, as a survivor, she talks to her cell phone, and it is of course to us that she tells her story.

The main actress Marie Reuther  is overwhelming. This moving series takes us into another world, that of the impossible mourning, the search for meaning. It

It will take you to the gut until the last minute.

TO WATCH IN YOUR MOVIE THEATERS AS FROM MARCH 30th

Elise, 26, is a great classical dancer. She is injured during a performance and learns that she will not be able to dance anymore. From then on, her life will be turned upside down. Elise will have to learn to repair herself…

The World of Yesterday, Diastème

Elisabeth de Raincy, President of the Republic, has chosen to retire from political life. Three days before the first round of the presidential election, she learns from her Secretary General that a scandal coming from abroad is going to splash her designated successor and give the victory to the extreme right-wing candidate.

Rome, 1943, under Nazi occupation, the Eternal City hosts the circus where Matilde, Cencio, Fulvio and Mario work as freaks. Israel, the owner of the circus and father figure of this little family, tries to organize their escape to America, but he disappears.

Cyrano De Bergerac is a man well ahead of his time who shines as much by the dexterity of his repartee as by that of his sword. But persuaded that his appearance deprives him forever of the love of the one he holds dear, the resplendent Roxanne, he cannot bring himself to confess his love for her, thus leaving her to succumb to the charms of the

Candy, a five night event, premiering May 9 on Hulu, by Robin Veith et Nick Antosca, on May 9th.

Candy Montgomery is a 1980 housewife and mother who did everything right—good husband, two kids, nice house, even the careful planning and execution of transgressions—but when the pressure of conformity builds within her, her actions scream for just a bit of freedom.

Five hitmen find themselves on a high-speed train traveling between Tokyo and Morioka, making very few stops. The five criminals will discover that they are bound by their mission. They wonder who will make it out alive and what awaits them at Morioka Station. 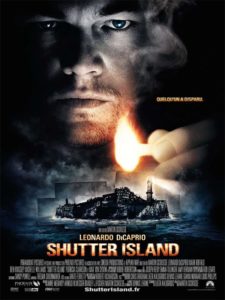 Two friendly couples from the Parisian intelligentsia love each other, cheat on each other and aspire to fulfill themselves in a changing world…

Investigating a crime that has gone unpunished, profiler Louise Bergstein (Natalie Madueno) races against time to stop a ruthless predator. Set in the Danish countryside, the second season is as dark and effective as ever. By Jonas Alexander Arnby

After the murder of a young policeman by a drug dealer, his unorthodox partner investigates in Berlin… By Lars Becker (“Dead or Rich”), a thriller with effective realism, carried by Armin Rohde (“Run, Lola, Run”).

The murder of a teenage girl sends three friends back to the terrors and traumas of childhood… Clint Eastwood brilliantly adapts Dennis Lehane’s novel into a film of formidable darkness, with Sean Penn and Tim Robbins at the top.

In 1944, the ephemeral and intense interlude of life, in the middle of the ruins, of a German soldier on leave… A masterpiece in the image of its sublime title, signed by the master Douglas Sirk (“Mirage of Life”), at the peak of his career. With John Gavin and Liselotte Pulver.

For more than a century, the great colonizing powers have exhibited like wild animals human beings torn from their native land. In this fascinating documentary, this “practice” has served many interests.

During the Great War, while the men fall on the battlefield, Hortense (Nathalie Baye) and her daughter Solange (Laura Smet) work tirelessly on the farm… On the side of the women who stayed behind, Xavier Beauvois makes a film whose silence contrasts with the fury of the front.

5. BEST MOVIES & SERIES AS FROM MARCH 30th ON ARTE

In 1971, Melvin Van Peebles shook up the figure of the black hero in American cinema with “Sweet Sweetback’s Baadasssss Song”.

This documentary traces the genesis of this hard-hitting film, which gave birth to the Blaxploitation movement, from Gordon Parks’ “Shaft” to “Jackie Brown”, Quentin Tarantino’s tribute to the genre.

Three Japanese men go away for the weekend as a reward for their assiduous love for the avatar of the video game they are addicted to… Between documentary and fiction, a troubling and melancholic portrait of a Japanese society where hypermodernity and solitude collide.

The release of the first confinement in spring 2020. Surrounded by a new team of writers and directors, Eric Toledano and Olivier Nakache deepen their subject, more than ever attentive to the emergence of speech in the ambient disorder.

Watch the two seasons in their entirety on arte.tv today.

Servant of the people

Best movies & series as from March 30th on Netflix

Best movies & series as from March 30th on Prime Video

Best movies & series as from March  30th on Canal+

An obstetrician at the hospital, Adam is often overwhelmed by events, submerged by XXL work weeks, vital decisions to make and a ridiculous salary. A daily assault course in which his personal life becomes a lifeline.

Best movies & series as from March 30th on Apple TV

By Daniel Syrkin with Glenn Close

They Call Me Magic, Rick Famuyiwa.

The real story of a legend. This four-part documentary event offers an intimate look at the life and legacy of Earvin “Magic” Johnson, premiering April 22.

Based on the New York Times bestseller, Pachinko is a sweeping saga that chronicles the hopes and dreams of a Korean immigrant family across four generations.

Pachinko is written and executive produced by Soo Hugh (“The Terror,” “The Killing”), who created the series and serves as showrunner.

Best movies & series as from March 30th on Disney Plus

Better Nate than never,  on April 1st, by Tim Federle.

How I met your father, series by Isaac Aptaker & Elizabeth Berger, postponed in May.

Best movies & series as from March  30th on Starzplay