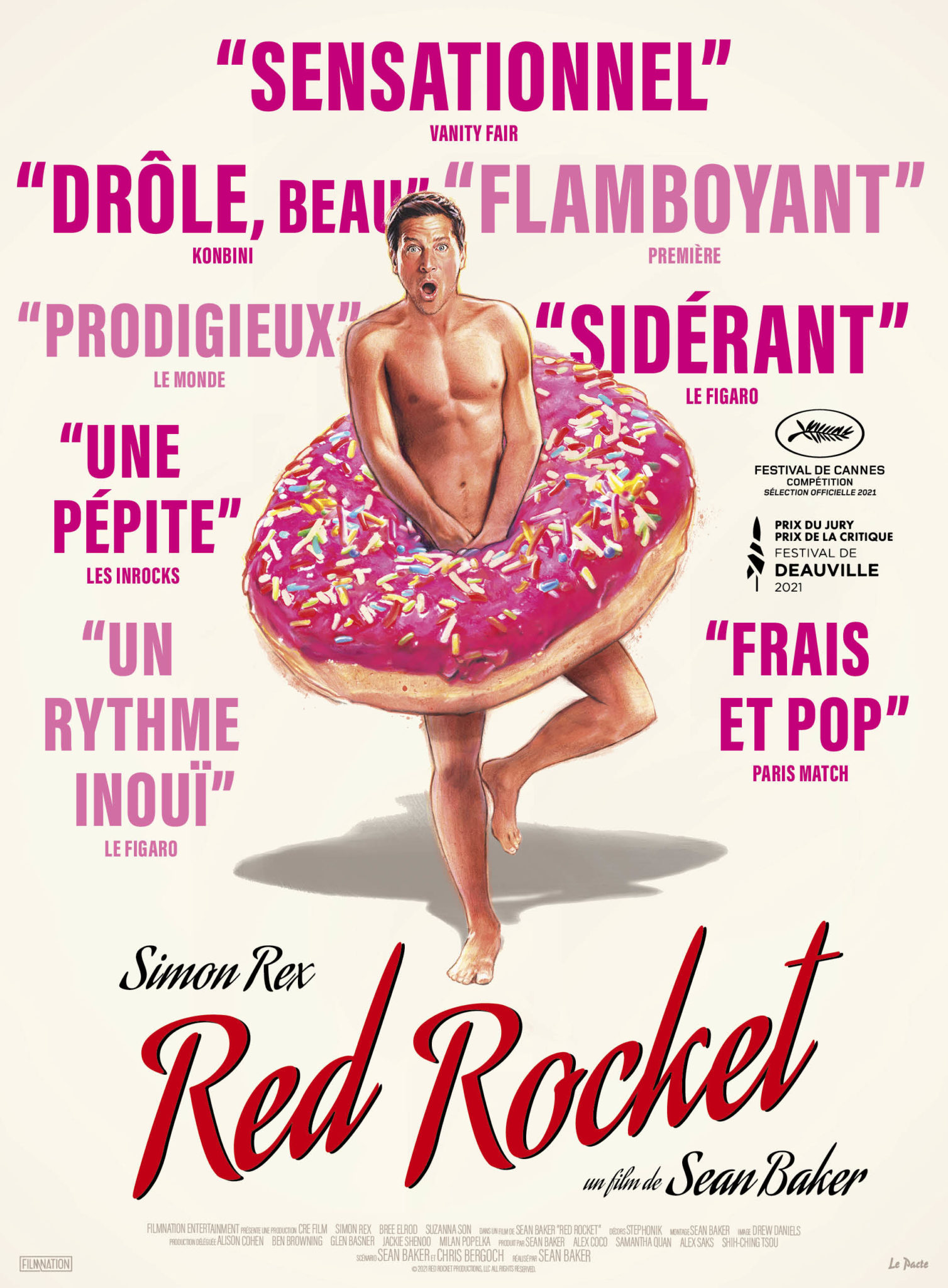 Red Rocket, new film by Sean Baker, in your theaters on February 2nd

What is the film about?

With no money, no job, he has to go back to live with his ex-wife and his mother-in-law…

To pay his rent, he resumes his little schemes but an encounter will give him the hope of a new start.

Is Red Rocket a comedy?

Reluctantly, they eventually take him in, but Mikey can’t help but get into trouble. One day he goes to a doughnut shop and discovers a 17 and a half year old girl, Strawberry, at the cash register…

A scenario not easy to film in the era of me too and feminism.

The Covid and the limitations in shooting space gave him the opportunity to make this film.

The action takes place during Donald Trump’s election campaign in what is known as the red state ( opposed to blue states, where the Democrats have a majority).

After the screening, Simon Rex, the lead actor, told us that he discovered the script when he arrived on set. He couldn’t back out of the film despite the numerous dialogues and nudity scenes.

With a Michael Fassbinder-like physique and a beautiful face, Simon Rex knows how to communicate an endearing side to this character, whom anyone would find horrible: manipulative, childish, cowardly, liar…Mikey would do anything to regain his past glory, which is causing disasters, to him and to those around him…

And more than his plasticity and his acting,  I really loved the obvious comic potential of Simon Rex (seen in  Scary Movie films and anchor on MTV channel in the 2000s).

Here, no dark back story to rely on (imagined life of the character. Simon Rex followed his instinct. Improvisation was an important part of the acting (25%) in this colorful movie shot on film, with beginner actresses and actors.

The young actress Suzanna Son (17 and a half in the film, 25 in real life) is masterful as Strawberry, a high school girl, selling doughnuts.  She is talented  (her voice!) but is stuck in a town where poverty is everywhere. And Strawberry dreams of leaving, too.

Bree Elrod (Mikey’s wife in the film) and Brenda Deiss (his stepmother) are also fabulous actresses.

Red Rocket  is without a doubt a very amusing movie, but it is also obviously disturbing, as is often seen in Sean Baker’s films.

The men finally get away with it. Or do they not?

In your theaters on February 2nd.

On Christmas Eve in Los Angeles, Sin-Dee, a young transsexual prostitute, recently released from prison after a 28-day sentence, learns from her best friend that her pimp and lover has been unfaithful. Reacting sharply, Sin-Dee sets out without hesitation to pursue him through the city. In her quest, the exuberant Sin-Dee will be confronted with the crazy situations and the marginalized people that make up the urban subculture.

The Florida Project, by Sean Baker

Moonee is 6 years old and has quite a temper. Let loose in a motel on the outskirts of Disney World, she’s doing the 400 knocks with her little gang of cheeky kids. Her mischief doesn’t seem to worry Hally, her very young mother.

In a precarious situation like all the inhabitants of the motel, she is indeed too concentrated on more or less honest plans to ensure their daily life…

Sean Baker is born in New York, he wrote and directed the films Take Out, Prince of Broadway and Starlet (winner of the Robert Altman Spirit Award). He is one of the creators of the Greg the Bunny series (2005).