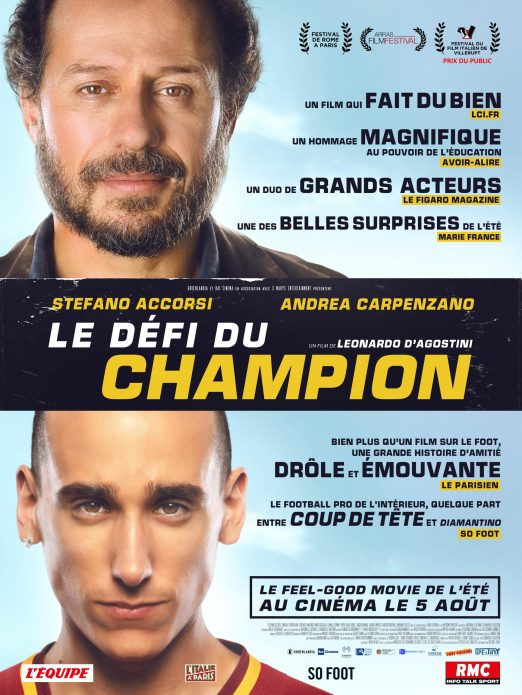 Produced by Matteo Rovere and distributed by Destiny Films.

The Challenge of the Champion

The freedom to win

Like El Presidente, a series currently broadcasting on Amazon Prime Video, Il Campione is about football but from a footballer’s point of view.

A promising young footballer, Christian Ferro is acting like a hooligan and tarnishing the reputation of AS Roma Football Club. The club’s president asked him to pass his A levels and chose a teacher, Valerio Fioretti, who knows nothing about football.

Il Campione, directed by Italian director Leonardo D’Agostini was shot with the permission of AS Roma football Club. Christian Ferro ‘s character was inspired by the life of Mario Balotelli, who had a difficult attitude and was taken up by the club’s president, none other than Silvio Berlusconi.

The champion’s challenge tells the story of friendship, paternity and passion. Leonardo D’Agostini shows that footballers are not stupid. Their credibility is questioned at every match.

Alone on the pitch

In reality, the life of footballers boils down to just one thing: how to occupy a football pitch. Off the pitch, without a referee or a team, the solitude and the huge sums of money make them lose all their bearings.

Either adulated or hated depending on the results, the main issue is no longer necessarily victory but money.
The pig, Christian’s pet in the film, is his master’s alter ego. Close to the people, he is alone; and when he is no longer useful, they get rid of him.

Valerio and Christian’s relationship changes over the course of the film and becomes that of a father to son. And the director has dedicated this film to his father.

This moving and funny first feature film highlights the importance of learning and credibility, notions that are always relative in the eyes of others.

The meeting between Christian and Valerio, the actors Andrea Carpenzano and the famous Stefano Accorsi, their complicity and their touching exchanges make this film a nugget, to be seen in movie theatres from August 5th.

It won the 2019 Nastri d’argento (Ruban d’argent) best feature movie of the year.

Find out more about movies and football:

On Arte, Blow-up, the movies and football.