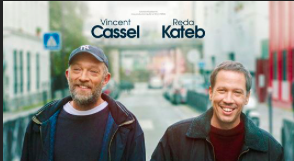 Martin Scorsese recently declared that future of cinema is in documentary fiction. Hors Normes is one of them.

Being Hors normes is still being human

Nakache and Toledano directors  were right right in making this film about autistic people and the lack of structures adapted to their disability.

This movie is inspired by the story of a friendship and the absolute commitment of two educators, one Jewish, Stéphane Benhamou, the other Muslim, Daoud Tatou.

Their daily lives are made up of time trials to help children and teenagers with autism to get better.

The two protagonists, one is Jewish, Bruno, (Vincent Cassel) and is twenty-four hours a day on the breach to help in the reception of autistic children and adolescents.

Malik, a Muslim, is played by Reda Kateb, is in charge of educator training. He organizes outings between apprentice educators and autistic people.

Both men have the same vision of their work and have the same commitment. And it is not insignificant today to put on the screen together a Jew and a Muslim.

They are sensational in their roles and Hélène Vincent, the exhausted mother of an autistic teenager, is overwhelming. I remind her as the funny Mrs. Le Quesnoy “Marie-Thérèse, ne jurez pas!” from Étienne Chatiliez movie, La vie est un long fleuve tranquille.

Language is at the heart of the film. Not only autism but the language of young apprentice educators, new Parisian titis, played by non-professional actors, Bryan Mialoundama and Marco Locatelli.

The cameras are very close  to the protagonists (” never close enough to our subject”, once said the great photographer Robert Capa).

The directors made a moving, strong, fair and committed film. Their best without a doubt.

These two brothers chose a fight, the Others.