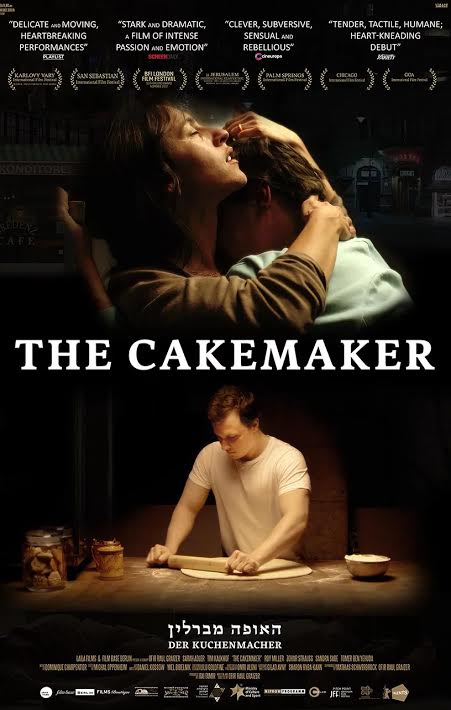 The Cakemaker is the first movie I saw at The Festival of Israeli Movie of Paris.

The Cakemaker begins in BerlIn.

Oren, an Israelian business man, goes in a pastry shop each time he comes to Berlin to taste and savour the cakes baked by Thomas. Then he falls in love with the young cakemaker. It’s the beginning of their love story. But Oren lives in Jerusalem, is married and father of young boy, Itaï whom he cherishes more than anything. He wants to keep his life going this way. One day, everything stops. Oren dies in a car accident in Israel. Thomas decides to flight to Jérusalem. Oren’s wife, Anat host a coffee. She’s mourning but she’s trying to live despite the grief. Thomas meets her and pretends to be a foreign student looking for a job….

Gesture and cooking are at the heart of the movie. When Thomas’ hands kneads, he explains that « it should be treated in a certain way » and he enjoys the preparation and the touch of it. His hands are constantly in the camera’s range.  By the way the director’s films his broad shoulders and his hands, Thomas exudes a constant sensuality. Only gesture matters. Only them don’t lie.

The director switches between a raw light and a pale one to show the appearance of the characters in contradiction with who they are truly. Anat owns a casher coffee but doesn’t eat casher food.

Thomas fits in Anat’s life and lies to her pretending that he didn’t know his husband. The only one who understands the reason of Thomas’presence is the mother of Oren and shows it in a look.

Offir Raul Graizer asks the question of the relationships today between Israel and Germany. They are still complicated. Thomas, non Jewish German is not well-regarded by Moti, the religious friend of Anat. But for the director, Germany and Israel have common features : strong ties to their past, always connected to the present, walls, destroyed in Berlin, but always present in the city cut in half and in the relations between people from the East and the West.

The languages spoken are divided according the characters : German between the lovers, Hebrew between the Israelian and English, an area of transition and strong ties between Anat and Thomas.

But baking transcends the language and boundaries between people. Thomas’ cakes make the coffee successful. Thomas seduces by his skills in baking. The actors play sincere and convey the subtlety of this story which mix mourning, hope and lies. This movie affect us us because the story is modern, well played and the aesthetic treatment of the image is beautiful.

Dominique Charpentier composed the score and The Cakemaker has been selected in 56  festivals.